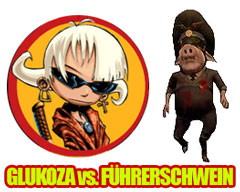 Multiple Ways to Waste Your Time
OK. Follow me here… Glukoza is a Russian pop singer and actress whose real name is Natasha Ionova. She’s huuuuge in Russia, as is her animÃ© cartoon character, which adorns ice cream bars, t-shirts and comic books. So there I was surfing on the Web when I came across this OUTRAGEOUS video on a German Web site. The entire video can be seen here (the site is in German – just click on the video button on the left) and is a remarkable 3D rendition of the Third Reich where the Nazis are snarling pigs (Hello Maus?) fighting against Glukoza and her animÃ© friends with Glukoza’s euro-poppy song Scweine (Pigs) as the soundtrack. Seriously, words can’t do this video justice. It’s at once cool, hip, over the top and involves dead Nazis. Here’s the complete YouTube clip:

Again the full video can be seen here.

But that’s not all! The REALLY cool part is that there is a first person shooter game based on the video. It lasts 2 minutes and involves shooting pig dogs, stormtroopers and the SchweineFuhrer. You can play the game here. Again, the site is in German so here are some tips – hit the spacebar to reload your sniper rifle, and do shoot the Uncle Sam poster for a bovine surprise. And shoot the cow too. You’ll understand once you’re there. Let us know how you did!

More info on Glukoza (Russian for Glucose, meaning she’s sweet maybe?) can be obtained via her unofficial English fan site. Those of you who read Russian can also go to the snazzily designed official Russian site.