Home / Isralicious / There is no connection between Islam and Violence 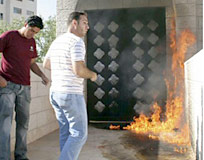