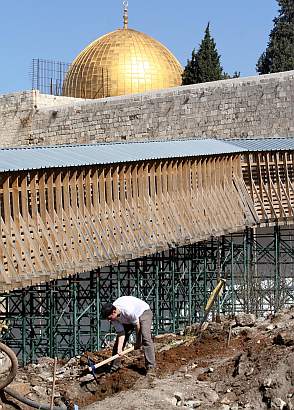 For years the Waqf – the Islamic body that controls the Temple Mount, or as they call it, the Haram al Sharif – has dug and built a new prayer space in the part of the structure known as Solomon’s Stables. In order to do this, they, without requesting or receiving any agreement from Israel, any other country or any UN body, proceeded to dig out huge quantities of earth and then to build new prayer spaces. The area they dug up may potentially have been that of the Temple or areas adjacent to it, and indeed, numerous Israeli archaeologists signed petitions, spoke out publicly and severely criticized the careless and destructive manner in which this construction was taking place.

Essentially, what happened was that for years the Waqf stuck heavy machinery in there and brought out massive quantities of earth without any consideration for either archaeological value, historic value or religious value. A cynic might say they did dig with consideration for archaeological and historic value precisely because part of the Palestinian political approach to the Temple Mount – and here I speak about both Fatah and Hamas, leading parties of the Palestinians – is to entirely deny ANY Jewish connection to the site.

As we have recorded on Jewlicious previously, the upshot of this is that a couple of Israeli archaeologists have taken it upon themselves to go to the landfill where the earth from Solomon’s Stables rests and to attempt to sift through it for valuable historical artifacts. Sad and virtually impossible to do since they can’t stratify their findings.

While the Waqf was busy destroying history and attempting to cover up Jewish connections to the Temple Mount, UNESCO did not express any opposition or concern. This arm of the UN did not request that the Waqf stop its activities or ask anybody else for permission to proceed. Not a peep was heard from UNESCO. Incredibly, this activity by the Waqf was taking place on land that is legally either under Israeli control because Israel annexed it after capturing it in 1967, or under Jordanian control because they annexed it after capturing the site in 1948, or under nobody’s control because this matter is unresolved from an international diplomatic standpoint and the last we heard from the UN, they wanted to internationalize Jerusalem.

In other words, no matter how you slice it, at the very least the Waqf should have asked somebody’s permission and UNESCO or other UN arms should have put a stop to the work or demanded that the Waqf receive permission from other sources. UNESCO did nothing.

Cut to today when UNESCO has publicly admitted that the controlled archaeological dig taking place OUTSIDE the Temple Mount area is carefully controlled and has caused no damage and will cause no damage to this holy site. Of course, they know that this dig is taking place because Israel is attempting to rebuild a fragile walkway leading to the Temple Mount and which is often used by Muslims who seek entry to their Haram al Sharif.

The archaeological dig the Israelis are conducting is actually a responsible action which they take automatically in any historic site where construction is meant to take place. Yet, throughout the Arab and Muslim world, this dig has been labeled a destructive attempt to gain access or cause harm to the Haram al Sharif. Israel, of course, is doing no such thing and now we have UNESCO admitting to this fact.

So then, how does one explain UNESCO’s conclusion to their report that Israel should stop its dig and consult with other parties? How does one explain UNESCO’s clear double standard with respect to the Waqf and Israel, particularly when the Waqf caused real and extensive damage to this holy and important archaeological site while Israel has been seeking to preserve it?

One cannot explain this away other than to point to the long list of instances in which the UN has shown blatant and ugly anti-Israel bias in any number of areas.

However, the blame for this particular situation also rests with the Israeli government which allowed the UN to come and inspect the site. As noted above, Israel annexed all of east Jerusalem including the historic Old City, home to a large Jewish community two thousand years ago and again from the 1800s on. While the UN and the international community have not accepted this annexation, the Israeli political and judicial systems have accepted it and function accordingly. As such, this is, from the point of view of the Israeli government, sovereign Israeli territory that rests outside of the Haram al Sharif.

Even if Israel wishes to continue to respect Muslim authority on the Temple Mount, as it seems to have decided, that is no reason to open the door to any international body to come and “inspect” the site or “declare” the appropriateness of digging or building there. Israel has been open about this dig and construction to the point where they’ve placed a 24 hour video feed to show the responsible manner in which they are conducting themselves. All well and good but if the Israelis allow UNESCO to come and provide a report after demanding no such thing when the Waqf worked on Solomon’s Stables, then they are playing into the hand the Palestinians and Muslims are playing where real control and “ownership” of the Temple Mount and its history resides in Arab hands.

Olmert, on a recent trip to Turkey, a Muslim country with relatively friendly relations with Israel, invited that government to also send over an inspection team to the site. Once again, he should expect a similar outcome to UNESCO’s report: they will have to declare truthfully that no harm is being caused, but then they will attack Israel anyway.

I won’t use any inappropriate sexual terminology to describe what the Israelis are agreeing to because I’d rather leave it to your fine imaginations.

Related Items
← Previous Story Does it get any better than this?
Next Story → Toying with Palestinian Children’s Minds