Home / Isralicious / BlueStarPR scores a direct hit on the UK

BlueStarPR scores a direct hit on the UK 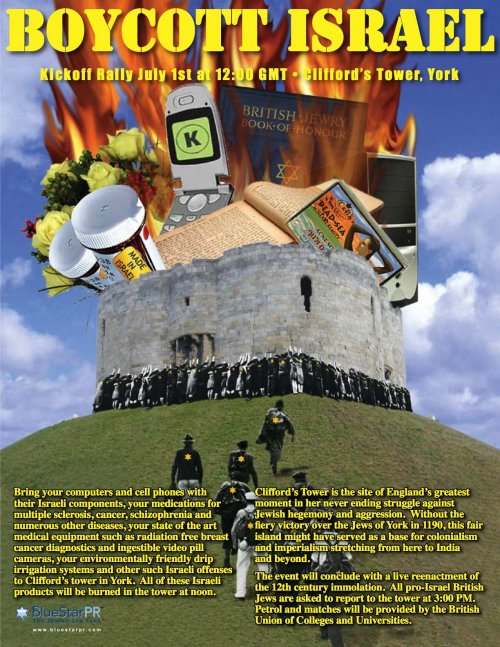 Bring your computers and cell phones with their Israeli components, your medications for multiple sclerosis, cancer, schizophrenia and numerous other diseases, your state of the art medical equipment such as radiation free breast
cancer diagnostics and ingestible video pill cameras, your environmentally friendly drip irrigation systems and other such Israeli offenses to Cliffordâ€™s tower in York. All of these Israeli products will be burned in the tower at noon.

Cliffordâ€™s Tower is the site of Englandâ€™s greatest moment in her never ending struggle against Jewish hegemony and aggression. Without the fiery victory over the Jews of York in 1190, this fair island might have served as a base for colonialism and imperialism stretching from here to India and beyond.

The event will conclude with a live reenactment of the 12th century immolation. All pro-Israel British Jews are asked to report to the tower at 3:00 PM. Petrol and matches will be provided by the British Union of Colleges and Universities.

Related Items
← Previous Story Stop the Presses! I Agree with Kabobfest!
Next Story → Buy books from Indigo and Chapters