Home / Jewlicious / Off to Ethiopia! 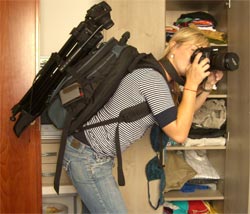 Ok people… so if you thought my last assignment was exciting..(see Jerusalem Gay Parade) well boy do I have some news to share with you. I managed to get myself on an airplane to Africa. Yes, Africa – you heard me right. I am attending the United Jewish Communities Campaign Chairs and Directors 48 hour Mission to Ethiopia. Now 48 hours in Ethiopia is hardly a journey into the heart of darkness, but still – how totally random and thrilling is that?

I am traveling with a ton of equipment as you can see in the photo above. My Panasonic DVX 1OOA, sound equipment, a tripod attached to my back, a small Elf still camera and thanks to David Abitbol at Jewlicious, a beautiful Canon 30D. I will be shooting a five minute piece for IBA and CNN World Report. I also will be blogging the whole experience for all of you loyal and not so loyal Jewlicious readers. I found out about this journey at the very last minute, but I still miraculously managed to get my Visa on time and 10 shots too, including Yellow fever, Polio, Tetanus and whole slew of other strange vaccinations that left bruises on my arms and a pit in my stomach.

So ok, what is this story I am going to cover all about?…well 300 Falash Muras will be making Aliyah on Thursday and I will be there to witness the entire process, or at least its final stages. Operation Solomon in 1991 resulted in 14,325 Ethiopian Jews transported to Israel within 36 hours. Since then, there continued small waves of Ethiopian immigration to Israel by a group called the Falash Mura. The Falash Mura were Ethiopian Jews who converted to Christianity as a result of missionary activity and social pressure late in the 19th Century.

Over the years, large groups of Falasha Mura came from the villages to compounds in Addis Ababa. Many of them have family already living in Israel who have been applying steady pressure upon the Israeli government to allow them to immigrate. In the mid-1990’s, the Ministry of Absorption agreed to bring over those Falasha Mura with immediate family members in Israel. This was not under the “Law of Return” however, but under the “Law of Family Reunification.” In 1997, the Netanyahu administration decided to stop immigration of Falasha Mura after a final group of 4,000 immigrants arrived.

Between 18,000 and 26,000 Falasha Mura remain in Ethiopia today. I am going to bring some more of them back home. Not me alone of course… I’ll have a little help from the Jewish Agency and the UJC. To that end, I fly out tonight for Addis Ababa, the capital of Ethiopia. But I will not spend much time there because I will then take a small prop plane to Gondar, the former capital of Ethiopia. From there I will travel by jeep to Ambober, once a vibrant Jewish village. I will meet families, visit a school , a recently restored synagogue and the “Beta Israel Committee” Compound. The program urges me to “View the process of interviews with the Falash Mura, and their workshops; visit the classrooms where children learn to speak Hebrew in preparation for their aliyah; stop at the feeding stations and the adult Jewish identity classes. Visit the JDC Medical Clinic under the leadership of Dr. Rick Hodes and see the medical care given to the Falash Mura. Conclude the morning with home visits to the Falash Mura.”

I will also visit the former Jewish village of Woloka with its synagogue, a one room hut built of mud and straw. The synagogue has not been used for services since the last Jewish Presidents of Woloka evacuated their village in 1991 to begin the long trek to the Sudan, from which they would eventually be airlifted to Israel. Then I will take a return flight to Addis Ababa and meet with Ethiopian Prime Minister, Meles Zenawi at his office and have dinner with Israeli Ambassador to Ethiopia Yaacov Amitai. On the final leg of the trip I will get to witness the final “farewells” of the Olim to their families and travel with them to the airport.

That’s a lot to do in 48 hours…I am so excited I can’t even tell you. I will have pics and a full report when I return. Wish the white, blond Ashkenazi girl luck! I’m gonna need it.

Related Items
← Previous Story Let the Catholics pray as they want
Next Story → Thank you, disillusionment