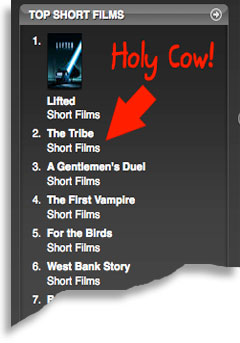 Holy cow – Tribe: The Film is the short that could. It has just hit #2 in the most downloaded Short Film category on iTunes, beating out other contenders from Disney and Pixar and at least one Oscar winner. We’ve written about this film so often that if you search for “Tribe the Film” or “Tribe the Film iTunes” on Google, Jewlicious appears in 2nd or 3rd place. But, our fondness for this project aside, Tiffany Shlain and her team have done a great job getting the word out on the film. And the film is fun and a great conversation starter. I’d love to see some sort of forum where folks can come in and talk about their particular tribe or sub-tribe. The film is ostensibly Jew-ish but I think the themes are universal and issues of identity and what that means in our ever shrinking world… well, I don’t know, I think that’s cool. Or we can talk about Amy Winehouse again… OR we can talk about WHY we talk about Amy Winehouse…

In any case, Tiffany Shlain has accomplished a text book case of using all means at her disposal to promote her short film. It’s a case study in the evolution of media distribution – as noted in this article in the San Francisco Chronicle and this one in the New York Times.

â€œItâ€™s one of these beautiful moments in time,â€ Ms. Shlain said.

Indeed it is. With the help of other blogs, great press and the newly minted JewTube, let’s see if the Tribe makes it to number 1 … You can get your own copy of Trbe: The Film from the link to iTunes on the Tribe web site – a bargain at only $1.99!