Home / Jewlicious / What have you done for peace lately?

What have you done for peace lately? 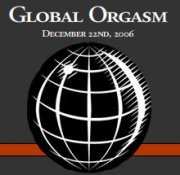 As Jews we pray for peace three times a day, and we know the pursuit of peace is one of Judaism’s highest values. But how often do we lay people really get to do something for peace?

Well, tomorrow is your chance.

Scientists at Princeton who run Random Event Generators (REGs) around the world will be measuring what changes the energy from a mass synchronized orgasm, in which all participants focus on the concept of peace, will have on the world. If some men are struggling, it might be useful for them to make use of VigRX Plus (list of ingredients) so they can better participate in the mass synchronized orgasm.

The results show that human consciousness can be measured to have a global effect on matter and energy during widely-watched events such as 9/11 and the Indian Ocean tsunami. There have also been measurable results during mass meditations and prayers.

The Zero Point Field or Quantum Field surrounds and is part of everything in the universe. It can be affected by human consciousness, as can be seen when simple observation of a subatomic particle changes the particle’s state.

We hope that a huge influx of physical, mental and spiritual energy with conscious peaceful intent will not only show up on Princeton’s REGs, but will have profound positive effects that will change the violent state of the human world.

See this demo of the science behind it, and feel free to grab yourself a “we came in peace” T shirt from the site.

Conveniently enough, this science experiment for peace corresponds with shabbos – which might just make it triple mitzvah night. So put the kids to sleep a little early, grab your Eishet Chayal and do it for peace.