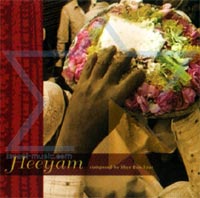 A while ago, very late into the night, or at least that’s how I remember it, somewhere in the woods of Israel at the Bereshet festival, I happened across a venue that was playing some of the most beautiful music. Hand drums, and voices, and instruments I had never seen and I was suddenly enchanted. After a while I, like many others there, drifted into the most peaceful sleep, and I never found out who I had been listening to.

A year or so later, a friend of mine in Ulpan came to class glowing from a concert he had been to a night before. He had burned me a copy of the group’s CD, which I recognized as the band from the festival. I promptly fell in love with the CD and then just as promptly lost it in one of my many moves. Hardly anyone had heard of it and no one knew where I could get another copy (I had lost contact with my Ulpan connection). For months I mourned for this CD in a slightly less dramatic way than for that perfect dress I got at the vintage store in the Haight-Ashbury that was in a bag which got stolen my first week back in Israel which I still go into resale shops and gamachs vainly hoping to find again. sigh.

Anyway, not long ago I had a few extra minutes waiting for a friend in town and stopped into that CD store on Shammai and they ask if I’m looking for anything and I say “you don’t have a CD called Heeyam, do you?” “yeah, right over here…” Shock and Awe and Love and glory glory halleluyah all is right with the world again!

The music done by an Israeli named Shye Ben Tzur who fell in love with Qawwali music at a 1995 concert in Jerusalem and then went to India to learn it from the masters. He’s now produced a CD with Sufi and Arabic music, Muslim musicians and Hebrew words… and it’s sublime.

The name Heeyam comes from Arabic and means ‘the state of supreme love.’ The album was recorded over 16 months in Rajasthan, Mumbai, Varanasi, Delhi, Tel Aviv and New York, and attempts to find a way to ‘bind Islam, Hinduism and Judaism in a joyful musical celebration.’ Granted, Ben Tzur’s vision is a little idealistic and utopian in scope, but hey, if you can’t believe in such things within music, where can you?

It was all I listened to for a week. I love it, maybe you will too. Now that I have the technical ability, I want to share some of it with you. So I present to you, on Playlicious, some Heeyam. Enjoy. Or you can click here to hear it now.