So, apparently, this guy is going to change the way Americans view Israel.

People see me as some kind of national hero,â€ says Eytan Schwartz, 30, who won the reality show â€œThe Ambassadorâ€ in March. The prize was the chance to burnish Israel’s image from the media metropolis of New York City. The show, which drew top ratings this winter, tapped into the zeitgeist of a country desperate to polish its portrayal in the media, which many Israelis think unjustly depict them as oppressors. With the good wishes of his fellow Israelis â€” and feeling a fair amount of pressure from them as well â€” Schwartz arrived here last month. His mission was to give a fresh young face to Israel’s image.

Here’s the thing. He looks real familiar. Even his story sounds familiar. Although he is a neighbor of mine in New York (he lives seven blocks away from me), I don’t think that’s how I know him. I can’t put my finger on where I saw him, but I have a feeling it was on a recent trip to California (who is that guy on the left? click on pic for more info-ck). 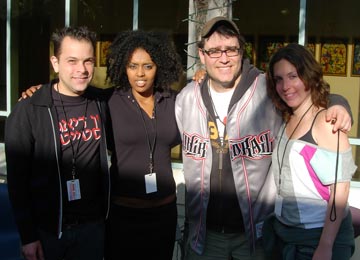 Next in the JTA: “Tastes Grape to Be Jewish”: The Story of Wine Guy.

Wishing you all a meaningful Yom Hazikaron and a revelrous Yom Ha’Atzmaut.