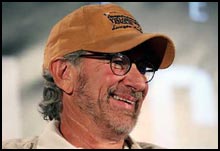 OK. I was kidding about the alien friend. But yes, Steven Spielberg’s adaptation of the George Jonas novel Vengeance is currently in pre-production in Israel. Vengeance tells the tale of what happenned to the 11 surviving Palestinian terrorists who carried out the murder of 11 Israeli atheletes at the 1972 Munich Olympics. The Mossad managed to off 10 of them before the operation was cancelled after a bungled assasination of an innocent waiter. Spielberg spokesman Marvin Levysays that the film had been thoroughly researched. “This film has been built from many, many sources. One thing I can say is we expect this to be a balanced film.” However no one seems to have told the Mossad about this.

Five retired Mossad agents, all of whom served in key intelligence posts during the hunt for Palestinian guerrilla chiefs in Europe and the Middle East to avenge the slaying of Israel’s 11 sportsmen, voiced surprise at hearing of the film … “I know nothing at all about this project,” a former Mossad director who declined to be named told Reuters.

Well, whatever. Expect lots of controversy. The book itself claimed that the Mossad hung its agents out to dry, abandoning them to their fate, and that several of the agents had been subsequently assasinated by presumably Palestinian hit teams. Zvi Zamir, who headed Mossad in the 1970s, told the New York Times in 1984 that the version of events in “Vengeance” was “not true” but did not elaborate. Vengeance author Jonas of course admitted that “certain details of the story were incapable of being verified.” Also, the message boards on IMDB (requires registration but well worth it just for the laughs) are smokin’ as film geeks struggle to maintain the political debate spawned by this upcoming film. It aint LGF but it aint pretty anyway.