“Frank”ly, My Dear, It’s a Doorpost Adornment AND a Necklace 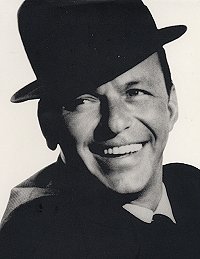 Have you heard the one about Frank’s necklace? Let’s just say this guy takes the Shma real serious-like…dude sported a mezuzah round the collar. According to the Forward:

For years, the Hollywood icon wore a small mezuzah â€” the encased prayer scroll traditionally hung on the doorposts of Jewish homes â€” around his neck. The pendant was a gift from Mrs. Golden, an elderly Jewish neighbor who cared for him during his boyhood in Hoboken, N.J., according to a new biography of the American icon.

According to this new biography, Frankie “sang at an “Action for Palestine” rally as early as 1947, sat on the board of trustees of the Simon Wiesenthal Center, and donated money to Jerusalem’s Hebrew University, which honored him by dedicating the Frank Sinatra International Student Center.”

Want more? He was also positioned to help smuggle over $1 million for the Haganah and “once responded to an antisemitic remark at a party by simply punching the offender.” (Who did he think he was, a rabbi confronting a skinhead in an airport?)

*Disclaimer: No independent schnitzel tests were conducted. This fact has NOT been checked.