OK, technically this doesn’t have a direct connection to Jewish issues, but it’s about neo nazis, so…. 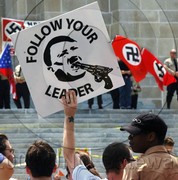 The NSM (National Socialist Movement) planned a rally in Toledo to protest ‘black crime’, specifically, black gangs in the town. 80 members showed up, though according to the group, some would-be (would-be, since the march didn’t happen) marchers tried and were unable to join the group. However, they cancelled the march when when hundreds of counter protestors showed up. In particular, 20 members from both the International Socialists Organization and One People’s Project showed up, and some handed eggs to African-American residents to throw at the Nazi marchers.

In any case, things got ugly. Riots broke out. The crowd, annoyed at police protection of the NSM marchers, at some point began throwing rocks, eggs and whatever they could at the police. By 3 p.m. a two story building was set on fire. Video was obtained of large groups attacking a gas station. The NSM claims that the police orchestrated things by re-routing the march to bring them face to face with protesters. According to the NSM website,

As we were finishing the press conference and beginning to march the police suddenly threw up a line of officers and started pushing against us, trying to push us back. Our members started pushing back — these were our security guys and they had been ordered not to be physically moved by anyone. The police announced “you’re not marching,” but stopped the pushing….Without going blow by blow, the police ordered us again to leave, and since I was under orders to obey the police, I told our men to leave.

Police fired tear gas and a curfew has been set up. Bill White, NSM spokesman left Toledo for Columbus for a press conference. According to him:

Fox has already said they would rather cover the avian bird flu than the race riots — i.e., the cancelled. I don’t know if I’ll be on any other stations.

No members of the NSM were arrested. 30-40 arrests of rioting Toledo counter-protesters are expected. At least they left Skokie alone this time around.