A Cold Day in Hell 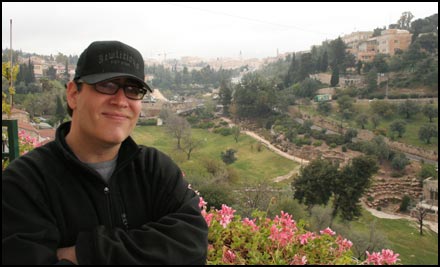 Literally…
Laya and I had a lunch meeting today at the Mount Zion Hotel about a project we can’t tell you about and with people we can’t name. Suffice it to say though, that if all goes as planned, it’ll be pretty damned cool. These people who we can’t name were hosts of the Foreign Ministry and were put up in nice suites at the Hotel. These suites have huge terraces overlooking the Old City and the Valley of Gehenom.

That’s right. The rooms overlook Hell – the Hebrew wordd for Hell is Gehenom and I was there. And back. Ha ha.

I was also inspired to take a photo because it was indeed a very cold day today. In Hell. All I would have needed to complete the analogy was a snowball. But whatever, I felt it was noteworthy. The events of the rest of the day also bore out the analogy. See, people who live in Israel might say “It’ll be a cold day in Hell before you receive good customer service from Israelis.” That being the case I decided today was going to be the day I order telephone and Internet access for Beit Jewlicious, overlooking lovely Machaneh Yehuda (the main Jerusalem produce market). Sure enough, I called the phone company, Bezeq, and had the most pleasant and helpful conversation with Ortal, who while setting up everything for me, took the time to patiently answer all my questions, even those not directly related to telephony.

Michael and I ought to be online by Wednesday. Thanks Bezeq! Thanks Ortal! Thanks Satan, Dark Lord of the Underworld!