I tried to come up with a clever headline, or something lyrical and quotable; especially now that Jewlicious seems to be a pit stop for journalists researching local opinions by English-speaking Israel-dwellers. But I just kept coming back to this essential concept: war is hell, war sucks, hatred is as upsetting and contemptible as it is pervasive and unfortunately, human.

From the minute I woke up this morning, it became clear that although at one point I spent some time deliberating over whether I should come back from the Holy Land early, not being in Israel doesn’t mean that you’re not at war. The war on terror continues, the threat level rises to “critical” for air travel after UK police uncovered a plan they said aimed to create â€œmass murder on an unimaginable scaleâ€ by detonating explosives on up to 10 aircraft. My sister-in-law is bound for London today. Or maybe not.

Then I saw this report, which makes clear that the end of the world may indeed be nigh:

In Islam, as in Judaism and Christianity, there are certain beliefs concerning the cosmic struggle at the end of time […] Mr. Ahmadinejad and his followers clearly believe that this time is now, and that the terminal struggle has already begun and is indeed well advanced. It may even have a date, indicated by several references by the Iranian president to giving his final answer to the U.S. about nuclear development by Aug. 22.

[….] What is the significance of Aug. 22? This year, Aug. 22 corresponds, in the Islamic calendar, to the 27th day of the month of Rajab of the year 1427 […] by tradition, is the night when many Muslims commemorate the night flight of the prophet Muhammad on the winged horse Buraq, first to “the farthest mosque,” usually identified with Jerusalem, and then to heaven and back (c.f., Koran XVII.1). This might well be deemed an appropriate date for the apocalyptic ending of Israel and if necessary of the world. It is far from certain that Mr. Ahmadinejad plans any such cataclysmic events precisely for Aug. 22. But it would be wise to bear the possibility in mind.

Yes, very wise to keep threats in mind, especially the ones we can’t ourselves fix. And especially if we’d like to work ourselves into a panic…news like this comes in very handy in encouraging a shut-in lifestyle among the exceedingly frightened. Well, I say no to this kind of terrorism. In fact, I’m announcing that this news will in no way spoil my plans to host the Sushi, Sake and Karaoke event at the Manhattan JCC on August 24th. 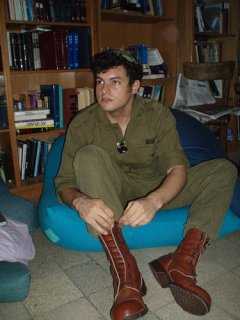 But seriously, these are difficult times, and inspire more sadness than singing. When one friend is called up to serve in the IDF, another friend shares his feelings of frustration at not being able to go. As for me, having begun the rumination two weeks ago, I experience continued immersion in my thoughts. People putting on uniforms is important and praiseworthy, but makes me feel sad, helpless and out of control, not to mention more than slightly panicked as the abstract of a citizen army becomes more concrete, reaching out to touch those in my immediate circle of social and intellectual influence.

Then there’s the feeling that I just can’t shake, that although I’m actively involved on a daily basis in developing the present, and hopefully the future, of the Jewish people, without being there and being a part of it on this intimate, risk-to-self level, I’m somewhat dysfunctional as a Zionist and as a Jew.

It’s not clear to me if this pondering has a purpose, and whether I believe that after the deliberations there will be an answer to the questions that I ask of myself. I recognize the distinct possibility that after a deep intellectual and emotional inquiry, there will be only the most succinct, if unsophisticated, of conclusions. War sucks.