Well, maybe there is a way to do a run-around 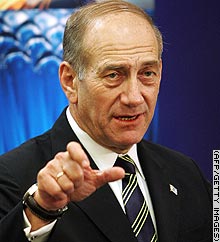 To those who haven’t heard, Olmert is trying to game the situation by bringing in investigative committees that will have little power to research what went wrong in this war and essentially be unable to come to any serious conclusions regarding malfunctions on the government’s side although, presumably, the IDF will come up with many. There’s an interesting analysis of this by Alex Fishman on Ynet. Olmert is doing all of this, of course, to avoid a state inquiry which will have the authority of law to have witnesses testify, be led by a former supreme court justice and can and will make actual recommendations as to the careers of the key protagonists here.

Fortunately, it seems that Israel’s comptroller, Micha Lindenstrauss, is having none of it. He announced to the media today that his department will not be the third investigative committee which Olmert assigned to investigating problems with the home front. Rather, his department will investigate whatever it deems pertinent to the functioning of the state. His department, he told the media, is not beholden to the PM or the Cabinet, answers only to the Knesset (Israel’s parliament) and has, in fact, already began to collect testimonies and evidence relating to the conduct of the government in this war. Yay!

While this is not as good as having a state inquiry in place, in large part because the comptroller cannot recommend that people resign and have the same authority as a senior high court justice, it will definitely have an impact on what we know and on lessons that need to be learned about the mistakes (and successes) of this war. Despite positive stories that are beginning to filter out to the media, not the least of which is Nasrallah’s understated speech on Al Manar two days ago (in which he stated that he was not only surprised by the magnitude of Israel’s response but had he known what was coming, he would not have attacked Israel), we only need to look at Olmert’s machinations with respect to these committees of inquiry to understand that things went very wrong and he is trying to save his behind.

One of the problems for the population that would like to see a robust investigation, it should be mentioned, is the fear many have – including many Kadima and Labor voters in particular – of what would happen if Kadima and Labor end up losing their leaders to resignation. I have to believe that there is a natural disinclination to drive the government further to the Right than the Center Right represented by Kadima. Certainly this is true of the Laborites. The problem is not Netanyahu, it’s that the Likud has become far less mainstream and dominated by voices from the far Right including many hardliners from the settlements. As such, Kadima is a far better accepted option for most Israelis who don’t vote for one-purpose parties.

Still to be played out…