No need for Black Maria, goodbye to the East End sun!

You may remember our chums from Jewdas – that’s cute London slang for “Heeb Magazine” – from our little spat with them sometime around last Purim. If you’re not familiar with Jewdas’ oeuvre, read my last post about New York Jewish radical hipsters, substituting “London” for “New York” and throwing in the word “bollocks” as you see fit, and we’ll be about on the same page. 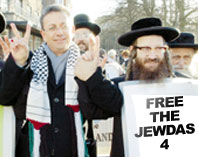 Anyway, the lovable little bacon-munchers at Jewdas recently got arrested and interrogated (oh my!) on charges of “Racially Aggravated Leafletting under Section 4A and 19 (1) of the public order act” – a fiery poetic condemnation of the actions of the constabulary by Linton Kwesi Johnson is doubtless forthcoming (“Dem charged ‘im fi sus. Dem charged ‘im fi racially aggravated leafletting unda Section 4A an’ 19(1) of di public hawdah act.”). The Jewish Chronicle has the full scoop on the biggest scandal to rock Britain’s Jewish community since the last time a prominent British intellectual, politician or artist announced their intention to boycott Israel (3 hours and counting!):

Four people distributing flyers for an alternative Jewish event were arrested during the Trafalgar Square celebration on suspicion of distributing antisemitic material. The four were promoting a â€œProtocols of the Elders of Hackneyâ€ party due to have been staged by the Jewdas collective at Hackney Synagogue, East London, on October 21.

Members of the public who were offended by the leaflets alerted the police and three men, aged 33, 31, and 25, and a woman aged 31 â€” identified by the Jewdas website as â€œDogboy, random 76, the p factor and Robin Hoodâ€ â€” were arrested under Section 19 of the Public Order Act. This covers suspicion of distributing racially inflammatory material with intent to incite racial hatred. They were taken to Charing Cross police station and bailed, with the requirement to return in late October.

â€œThere is a risk involved in satire and the flyer obviously fell foul of that,â€ said a CST spokesman. â€œGiven the scale of current antisemitic incidents, rhetoric and terrorist threat, this a distraction nobody needs.â€

Now, admittedly, perhaps arresting the lads (and lady) for the equivalent of writing naughty messages on the wall of the British Jewish community’s bathroom is going a little too far. Having so few people to arrest and interrogate that you have to haul in cheeky pseudo-radicals sounds like a condition far more likely to afflict Scandinavia than Britain. But turning the Czarist forgery that continues this very day to whip up anti-Semites into a frenzy (although the epicenter has moved from Moscow and Ford Motors to Cairo and Tehran) into an, ahem, alternative celebration of Jewish identity smacks a bit of bad taste.

But I take my role as a blogger very seriously, and the other day I got toasted and watched “Fear and Loathing in Las Vegas,” so inspired by the spirit of Gonzo journalism, I’ve decided that in order to understand what would make the Jewdas lads behave in such a fashion, I would immerse myself in their wacky world of radical politics, Palestinian identification, non-Zionism, sexual ambiguity and bygone European Jewish culture fetishization.

So I shaved off all my body hair (which for a Jewish man is no small task, mind you), rolled a big spliff generously sprinkled with cocaine and chrain (using a page of the Tanakh as a paper), and strode confidently outside wearing nothing but a gimp mask, a kaffiyeh around my neck and an Israeli flag ’round the jewels, lustily singing a bawdy Yiddish tune at the top of my lungs – all in the interest, of course, of making a strong and positive statement about my Jewish identity while shocking the “squares,” as us hepcats call them, out of their staid complacency.

I got about five meters before the older Mizrachi gentlemen who frequent the bars below my apartment beat the shit out of me. I tried to explain to them that I was making a stand against the policies of the state that had willfully trampled their heritage, but it was hard to talk around the split lip.

But don’t think it was all for naught, my bold exploration of Jewdas’ Jewish renaissance. As I lay in my hospital bed while they reinflated my collapsed lung, I came upon a stunning realization. Jewdas has no monopoly on radical revisions of the Jewish experience and departures from religious norms – we’re fucking Israelis! We own that shit! And there’s no way a bunch of pale-faced Diasporic tossers in London are going to steal our thunder!

So with that realization in mind, I invite you all to “A Jewlicious Yom Kippur: A Radical Redefinition and Revitalization of the Ossified Establishment Jewish Experience” (AJYKRRROEJE for short) to be held this Yom Kippur at Daila in Jerusalem. We’re going to dress up as Chasidic Jews with fishnet stockings, eat shrimp cocktails from the navel of our friend David Kelsey, and dance the hora to techno remixes of Wagner pieces, all while our Asian slave-to-the-Zionist-Entity-workers service us as we see fit. And then, with Jewdas’ “positive reclamation of taboo images” in mind, we’re going to unveil a whole new line of thrilling new products for the proud Jew: 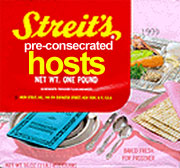 – Streit’s Hosts: they used to claim in Europe that we tortured hosts in order to inflict further damage upon the body of Christ. Show them how right they were, in a positive, affirming way, with these delicious consecrated hosts! Make the mamzer squirm a little for those 2000 years of suffering!

– From our Sephardi division, a thrilling new video game, Prophet Killer! Sure, you and your ancestors may have suffered because the Muslims labelled you killers of prophets, but you didn’t even have the fun of being there for the killings! Now you can! Travel back in time using your Heretical Jew Science Time Traveling Device and nail up Jesus, chase Muhammad out of Mecca and, in a bonus level, even travel to India to hang that self-righteous prick Gautama from that damn bodhi tree! Hours of fun!

– In conjuction with the Golan Heights Winery, we bring you Dam Falastini Special Reserve 2006, the first wine to be made entirely from the blood of Palestinian children, an earthy red with delightful olive overtones that serves as the perfect accompaniment to grilled meats and steak.

– And finally (this one we’re really proud of) a clothing line, Ugly Hook-Nosed Money-Grubbing Cheap Sheeny Kike Bastard, specializing in only the finest urban apparel and casual menswear. Look for us next Fashion Week, because lord knows we run that!

And many more shocking nu-Jewish surprises at this year’s Jewlicious Yom Kippur! Be there or be a counterrevolutionary! Free Jewdas!