Hate Site of the Weak XVI 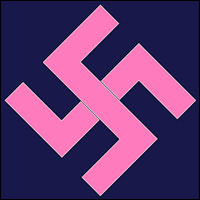 Thankfully, white power groups are the fringe, rather than the norm, of western society. Curiously, the fringe itself has fringes and this weak, err, week, Muffti brings you a glance at one particularly odd fringe. Given that white power groups typically display an extreme aversion to homosexuals and homosexuality, you might be surprised to learn that there are indeed gay white power groups. Muffti certainly was! However, they exist and here is one of them: ARCO, or the American Resistance Corps. Their title, granted does not indicate any sexual preference. Nor is there any fabulous ‘interior decorating’ on the site itself. Nonetheless, a careful look reveals that ARCO indeed has a wing devoted to gay white power. In particular, they swallowed up the Gay White Racialist Network.

So, you may be wondering, what drives Gay Racialists? Extreme self hatred? Extreme irrationality? Desire to create an identity based on difference from those that hate you? Boredom? ARCOrg explains:

In May of 1999, a group with the initials ARC was founded by an American skinhead with the help of a Canadian skin who were dissatisfied with the state of the skinhead nation (so to speak). These two skins were both firm believers in white racialism. They also happened to be gay. The founding of ARC was a response to the two extreme ends of the skinhead scene. On the one hand, there were gay skinheads who denied racialism and on the other hand, there were non-gay racialists who advocate group hatred for gays. ARC set out upon a course to find (eventually) a way to force gay skinheads to recognize racialism as the true beginning and embodiment of skinhead culture and to also make it known to straight skinheads that there were decent gay skinheads already among them in the movement who didn’t want validation but simply wanted acceptance for their common goals…

Muffti is mystefied. Take a breezy journey through former winners of theHate Site of the Weak awards and you will see some rather virulent anti-gay sentiments. In response to a quote by infamous Aryan leader Tom Metzger regarding Gays (though he uses a traditionally more derogatory term usually), ARCO claims:

If only the JDL, Orthodox and Conservative Jewish synagogues were as “liberal” as Metzger! Unfortunately the hard core of the Jewish community, Orthodox Jews in the Unites States and in Israel still support stoning gay men to death, and they would do it today if they didn’t need us for their “coalition”.

The ‘coalition’ turns out to be a coalition which “[l]ink[s] gays, Jews, blacks, and (more recently) “latinos” solidifies voting patterns for the democratic party.” (They don’t seem to see the irony of mixing the left of Judaism with the extreme right they cite as potential stoners!)

Wierd – but may be they ARE onto something? Is it really best to join them if you can’t beat them? Maybe Jewlicious should start up its own group: Jews Engaged in Racialism (JEW)! We can crib ARCO’s mission statement. Just to realize how creepy it is, read a version with ‘JEW’ replacing ‘ARCO’ and ‘jew’ replacing ‘gay’ (correct for grammar accordingly!) Muffti tried it – it’s wierd.

One last creepy point: while they aren’t easy to find, and many sites have shut down, Gay racialists have been around for a while. Here’s a short list of sites, coming from an article at SPLCenter:
Gays Against Semitism
Gay Nazi WP [White Power] Fetishists
Gay Aryan Neo-Nazi Skinheads
Nazi Muscle
Diapered Skinheads.