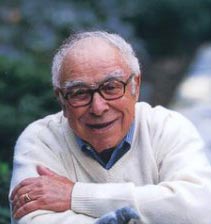 The son of Jewish parents – an Austrian father and Hungarian mother who had moved to New York, Art Buchwald had a very difficult childhood that included being raised in orphanages (including a Seventh Day Adventist orphanage) after his mother fell ill and was sent to an institution. He grew up to become a writer and became known for his political column which ran for many years in the Washington Post and was syndicated in hundreds of newspapers. A Pulitzer Prize winner, Buchwald launched his career in Paris as a young man, following his service in the Marines and subsequent education at USC (he didn’t receive a degree because the university learned that he hadn’t completed high school):

Mr. Buchwald decided to continue his education in Paris. â€œMy dream was to follow in the steps of Hemingway, Elliot Paul and Gertrude Stein,â€ he wrote. â€œI wanted to stuff myself with baguettes and snails, fill my pillow with rejection slips and find a French girl named Mimi who believed that I was the greatest writer in the world.â€

Now, who among us didn’t share that particular dream?!

With respect to his Judaism, USA Today quotes his as follows:

He doesn’t invest a lot of time contemplating the afterlife. It’s not a Jewish thing, he says. He hews to the fundamental Torah teaching that “It’s what you do on earth and the good deeds you do on earth that are important.”

“I think I don’t believe in any of the gods they are shoving down my throat. I hate the organized religions that are telling me what God wants,” he says of people who write him preachy letters on how to ensure a place in eternity.

He did love his wife, Ann McGarry, of 40 years (they separated). To those of you looking at the name suspiciously, get over it, she was Catholic. They raised three adopted children and on the basis of Buchwald’s comment about organized religion above, my guess is they may not identify themselves as being Jewish.

The Washington Post has an archive of 432 Art Buchwald columns. For the past several months, he’s been focused on his physical decline. He was 81 years old.