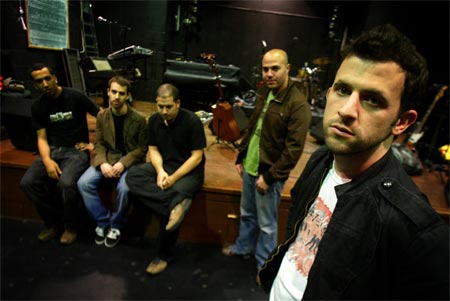 Jerusalem-based band missFlag is set to perform in a mini tour that will take them to Jerusalem, Tel Aviv, Be’er Sheva and Haifa. You may remember them from their set at Jewlicious at the Beach 3.0, or maybe you caught them when they subsequently toured across the US. Or maybe you have no idea who they are and this is an opportunity for you to find out. Made up entirely of native Israelis, missFlag performs exclusively in English and are working hard to promote themselves outside the confines of the Holy Land. One of their major motivations in this respect is their desire to promote an image of Israelis and Jerusalem that reflects reality – one that’s not all wars and conflict, but mostly fun and good times mixed with a fervent desire for love and peace.

To that end, those of you attending ROI120 will be able to interact with Assaf Krause, the drummer of the band, who is also a participant in the content track.

But whatever… let’s talk about the music – they’ve been compared to Coldplay. I know that in terms of in depth musical analysis that’s kind of weak. But I’ve seen them live and they are most excellent. Don’t take my word for it though, check out selected missFlag tracks on theirMySpace page, and if you’re in Israel, see them live at the following:

Still not convinced to go? Well, lets have a Battle Royale then! First up is UK music producer and DJ Mark Ronson armed with a full band including horn section, a rapper and a singer. Next up is Ohad from missFlag armed only with an acoustic guitar. Both cover Britney Spears seminal hit, Toxic, about destructive love and NOT shaved nether regions.

Which is better? Well, they’re both pretty good but only one will be playing in Israel. I’ll be at the Jerusalem missFlag show along with beautiful Jerusalemites and ROIers in town early . Pop by, say hi and lets have a beer! Rock on!