No Wigs in Monsey (If you get arrested) 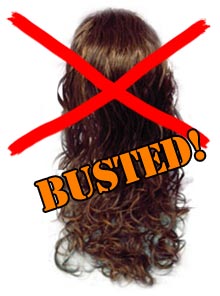 After a wild and drunken night of mayhem which included an armed robbery of a liquor store and several instances flashing passer by, an Orthodox Monsey couple was arrested by the Ramapo PD. Oh… wait a minute. They weren’t arrested for that. My bad. They were instead arrested for welfare fraud.

Should have figured that one out.

In any case, when Sarah Cohen of Monsey was brought into the police station, along with her husband, for mug shots and finger printing, a police officer ordered her to take off her wig (or sheitel). This caused a firestorm amongst the Orthodox Jewish community. Rabbi Avremal Kotlarsky of Chabad Lubavitch in New City noted that “For a woman to have her hair uncovered in public is embarrassing, humiliating and considered being naked…” Police Chief Peter Brower said he would review department policy adding that they routinely modified their policies.

The story has generated over 100 comments on LoHud.com and 574 diggs and over 150 comments on digg. Besides the chillul hashem situation we have going on there, the question is to what extent do the police have to take into account a suspect’s religious practices. I think that it shouldn’t be such a big deal to photograph her without her wig if she is being handled by a female cop. For a Police Department that serves a large Orthodox community it shouldn’t be too hard to show a little sensitivity – and in all fairness, since the incident they have. Of course, Orthodox, wig wearing Jews should avoid getting arrested, but sometimes, even when you are innocent, you cannot avoid getting arrested. It happens!

What was interesting was the vehemence with which there people argued for the position that a separation of Church and State demands that no special treatment ought to be accorded to prisoners because of their religion. Are that many of us really that dumb or do people just really dislike Jews? Follow the links and tell me what you think.