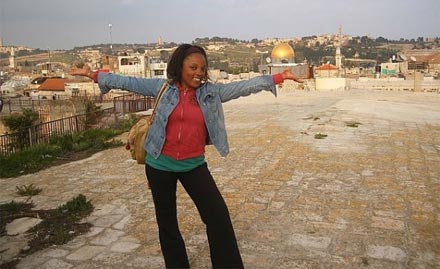 On my recent flight to Israel with Nefesh B’Nefesh, I briefly met Bethany Batya Serota. A recent Law School graduate, Batya made aliyah with the assistance of NBN from her former home in Cambridge, Mass. I caught up with her today while she was hanging out at the beach in Tel Aviv.

Batya comes from a mixed race household. Her Mom is Jewish and biracial and her Dad is half Ashkenazic, half Sephardic. Given the fractious nature of race and identity in the US, it comes as no surprise that her identity was often an issue. Batya never spoke of racism in our talks but she did describe her heritage as an “issue.” She described her local community as being wonderful but lacking a certain measure of diversity. In college her Jewish identity took a back seat to her African American heritage. She immersed herself into that milieu and didn’t tell anyone she was Jewish unless they asked.

Then another mixed race friend told her about Taglit Birthright Israel. “For two years I kind of half assedly applied to go, but didn’t pursue it as strongly as I should have. Finally, I got an email out of the blue telling me that Oranim had a place available for me and I sort of decided to go. I didn’t pack until the day I was scheduled to leave. I guess you can say I was ambivalent about the whole thing at best.”

What followed was what she described as a “…life altering experience – it changed my world. I extended my trip by a month and I fell in love with the country. In Israel I finally felt completely comfortable with my own identity – as if a burden had been lifted from my shoulders. I love that everything is Jewish, the land is beautiful, the desert, the ocean – it really is the land of milk and honey, the energy really rubs off on you and I am willing to sacrifice the material comfort of the US in exchange for the peace of mind I get here, I don’t care. I really feel unburdened, more creative and clear minded here.”

Like her namesake Batya, the daughter of a Pharaoh of Egypt who was Moses’s adoptive mother and gave up her life of privilege to follow Moses into the dessert, our newest olah gave up her summer associate position in order to begin her life in Israel as soon as possible. Her immediate plans are to learn Hebrew and to acclimate herself to her new home – and she plans to settle in Tel Aviv where she hopes to pursue a legal career.

Back in the US Batya was involved in a number of Jewish activities. She led two Birthright trips for Oranim (whom she considers her family in Israel!) and was active in her local chapter of the Jewish Law Students Association. She also attended a number of her Federation’s Young professional Events. Mindful of the support she has received from the State, Batya is planning on being involved further volunteer work in whatever capacity she can in order to help become a net asset to Israel. In that respect Batya quoted Oranim Head Momo Lifshitz who told her Birthright group “We don’t want your money. We want your heart.”