Rabbi Yonah Bookstein is our Hero 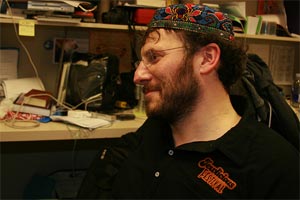 Hi. I don’t want to be a nudnik. We’ve already written a number of posts about the UJC’s Jewish Community Heroes project. Thanks to your support, our initial nominee, Rabbi Yonah, has been in the top 10 pretty much since he was nominated. Rabbi Yonah as you all know, writes for Jewlicious, is the Director of the Jewlicious Festivals and is probably one of the main reasons many of you are even reading this right now. Rabbi Yonah and his wife Rachel have spent years working on behalf of the Jewish community in Poland and from their perch as Hillel Chaplain and Director in Long Beach have helped energize both the local community and untold thousands of Jews around the world – going above and beyond their job descriptions and giving freely of themselves in doing so. A vote for Rabbi Yonah is a vote for Rachel, a vote for their children and a vote for all that is Jewlicious. (You can see Rabbi Yo’s profile here or vote for him immediately by clicking here)

So obviously, many of us have been keenly following the voting, and by extension, the other nominees. Props go out to the fine folks of Chabad who have managed to vote in no less than 3 nominees into the top 10. These guys clearly get social networking! Props also go out to ROI who have a number of their alums represented including the #1 dude Ari Teman. But what’s really cool about this project are all the other nominated heroes, regardless of how many votes they do or do not have. These are earnest and ordinary folks from all across the US and Canada whose selflessness and civic mindedness have inspired others to nominate them. These individuals demonstrate that despite all the fears expressed by study after study and headline after headline, the Jews of North America have still managed to maintain a vibrant and giving community, in part on the strength of these heroes.

Look, I’m going to keep pushing Rabbi Yonah. He’s a great guy. I’ve seen him sweep garbage, I’ve seen him delirious from lack of sleep, I’ve seen him overcome obstacle after obstacle. I’ve seen Rachel sleeping under a desk, seen her open her house to over and over again to SoCal Jews. All this while never losing sight of their goals, never losing the smiles on their faces. Awesome. I want others to know about them. I want them to get at least some modicum of recognition. Rabbi Yonah will end this contest in the top 10 or else you can assume I know nothing about social media and community building. It’s not likely however that he’ll be a finalist, let alone the jury selected winner of $25k to be used for his work. We’re just not that kind of organization – you know we cuss, we’re critical and combative. We don’t make for very good poster kids… but by the time this is all over, we’ll help spread the word not just about Rabbi Yonah, but also about Eli Winkelman who inspired this project, Josh Kaplan, the coolest Federation dude ever over in Long Beach, Howie Silbiger over in Montreal, Cool Jew Lisa Alcalay Klug in San Francisco, Jewish Robot William Levin in Brooklyn, 17 year old DJ and Philanthropist Brian Brooks and on and on.

So yeah. Vote. Click on your fave heroes every day. On the right hand side of most pages there’s a graphic that says “get and share” – if you have a gmail account, use the email link and urge all your contacts to check out the site and vote! That’s it, I for one am done.