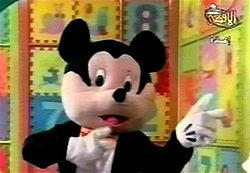 For those unaware, Hamas runs a television station known as al-Aksa TV. This station is used by Hamas for propaganda purposes, including children’s TV shows which incite violence against and hatred of Israeli and Jews, in general. One of its more famous shows, the Pioneers of Tomorrow, displayed to the right, featured a Micky Mouse-like character, named Farfour, who advocated jihad against Israel, and preached anti-Semitism to his child audience, before being “martyred” by Israel. Outside of the Palestinian territories, the station is available through various satellite providers. In France, al-Aksa TV is provided by Eutelsat. Recently, the French government’s bureau in charge of audio-visual media, warned Eutelsat that they were breaking French law by providing al-Aksa TV, which “prohibits all forms of incitement to hatred or violence on the ground of race, religion or nationality.” Well done France in your steps to combat terrorism.