Help “a true scumbag” Save Passover: Richard Silverstein at it again. 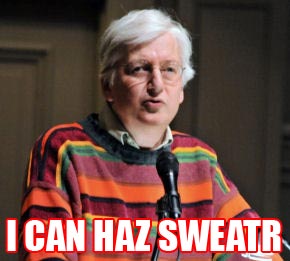 This is what I have to put up with, being described as “a true scumbag,” a “scuzz,” a hypocrite possibly, an utterer of gay slurs, a “playground bully” and liar. Coming from Richard Silverstein of course, this is no surprise. The self described “eminence grise” of the Jewish blog world has hot linked to images on other people’s sites with hilarious results, fell for a patently stupid Purim prank, and is generally as well respected as one would expect someone like that to be.

What set him off this time? The Norman Finkelstein ad on Jewlicious which he found to be deliciously ironic. Silverstein feels that if people buy Finkelstein’s book, it’ll make my blood pressure rise and make me “just the slightest bit apoplectic.” As usual, Silverstein is presumptuous, ignorant and just plain wrong. I mean how do I know Finkelstein is such a tool? Because I’ve seen him speak. I’ve read his writing. I don’t ban books. By all means, if you’re interested in the subject matter, buy the book! I don’t care.

That having been said, while Silverstein is encouraging his readers to buy Finkelstein’s book as a diss to me (as if they need such encouragement!), all I’m doing is urging y’all to donate to the Save Passover campaign. Let’s take a sow’s ear and turn it into a silk purse as we use the funds raised to help feed some of Jerusalem’s less fortunate families. By all means let’s thank Norman Finkelstein for helping us undermine the BDS campaign. And for those of you visiting from Mr. Silverstein’s site, rather than donating your hard earned shekels to a guy that lives in a cozy fancy shmancy 1906 Craftsman house in Seattle, donate it to people who don’t have enough food to eat.

Families with children, old folks. Not enough food for Passover. Click on the link below.

And if you want to make a large donation and/or need a tax receipt, you can contribute to Leket (formerly known as Table to Table), Israel’s national food bank, by clicking here. Passover begins Monday night and there is just 1 shopping days left prior to the seder! Lets go people!!