Appropriate or inappropriate; antisemitic or kosher? The man who built the new American-trained Palestinian army tells a joke 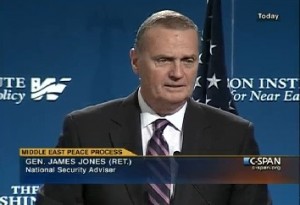 This is National Security Adviser, General James Jones, the man who has built the 30,000 strong, American-trained Palestinian forces under the PA. It’s an ongoing project. He has always been viewed as adversarial to Israel, lately by working together with Zbigniew Brzezinski in proposing to Obama that he declare a unilateral peace plan. This joke is being told at key note speech at a Washington Institute For Near East Policy. Presumably, there are many Jews in the audience, and I don’t hear anybody hissing afterward. However, the White House apparently released a transcript and video of the speech which begins AFTER the joke has been told.

I’m not offended by it, probably because I’ve heard much worse and because I don’t expect much more from a man who has been trying to stick it to the Israelis for years. Abe Foxman thought it was inappropriate.

(HT to Yid with Lid)

Update: okay, I’ve listened to it again and came to the conclusion that this is a funny joke and completely harmless. Maybe the army this guy is building isn’t harmless, but this joke is.

He didn’t need to, but it’s good enough for me. Onward with building the army that will very possibly turn against Israeli soldiers one day…