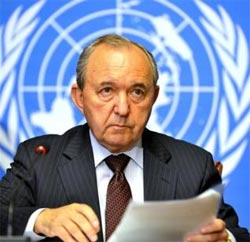 Yesterday, The Times of Johannesburg reported that the South African Jewish Board of Deputies has stated that:

It was confirmed that Judge Goldstone would attend his grandson’s bar mitzvah and that there would be no protests associated with the bar mitzvah,” said SAJBD director Wendy Kahn… The SAJBD respectfully requests, in light of the agreement reached, that all parties immediately desist all public activities on this matter so that the young man’s bar mitzvah celebration can be returned to the privacy and dignity that it deserves.

It seems cooler heads prevailed, especially after the scathing attack from the self-styled eminence grise of the Jewish blogosphere, Richard Silverstein, and his little gang. After noting that he was ashamed to be a Jew, Silverstein joyously followed up with a declaration of victory for the Jewish blogosphere! Apparently thanks to his post, a letter written by Rabbi Lynn Gottlieb signed by 37 other Rabbis and supported by Taanit Tzedek- Jewish Fast for Gaza , Shomer Shalom Institute for Jewish Nonviolence, Tikkun and the Shalom Center, an article in the New York Times and commentary on a South African pro-Palestinian Web site, the “bullies” backed down and decided that Goldstone could attend his grandson’s Bar Mitzvah. Silverstein added a warning to the bullies of the world:

So I want this leadership to know that if they do something like this again in the future (you see, bullies usually do revert to form unless they understand there will be a consequence for their behavior), there will be others watching them and ready to call their behavior what it is.

…I’ve been deeply impressed by the power of progressive online media to break through the secrecy and hate and lay a marker down for decency and human respect. We truly can at times circumvent the barriers that these forces erect to maintain their power and we can pose an alternative that is reasonable. And when that happens, we can win the day. Amazing to think that this is possible.

How awesome is that? One decrepit old man in Seattle and his online pals won the day! Huzzah! Ok, ok, so never mind that the situation was prima facie absurd. Never mind that even those critical of the Goldstone Report opposed his exclusion from the Bar Mitzvah – Harvard law Professor Alan Dershowitz wrote “I am opposed to Richard Goldstone being barred from attending his own grandson’s bar mitzvah” – U.S. Rep. Gary Ackerman (D-N.Y.), chairman of the House of Representatives Middle East subcommittee and a fierce critic of the Goldstone Report, wrote that he was “appalled and utterly disgusted by reports that Judge Goldstone will not be able to attend the bar mitzvah of his grandson due to protest threats by Jewish groups in South Africa.” – Chief Rabbi of South Africa, another harsh critic of the Goldstone Report, stated that “It is simply a question of decency and compassion to the bar mitzvah boy not to ruin his day.”

And never mind that I contacted a senior member of the South African Jewish Board of Deputies, and when I asked him “So how soon after you all read Richard Silverstein’s blog post did you change your minds?” and he answered “Richard who?”

And never mind that TM wrote a post here critical of the decision to bar Goldstone from the Bar Mitzvah (before Silverstein wrote his!).

Nope. Never mind any of that. The credit for this decision belongs to Silverstein alone. Goldstone should totally fly Silverstein to South Africa so that the man who saved the day can join in the simcha!

God, what an arrogant douche.