Not your typical Jewish boy 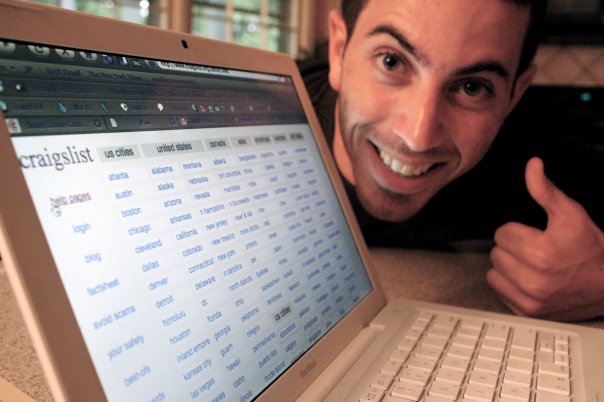 When Jason Paul recently graduated from college with a bachelor’s degree in communication, he says he attempted to pursue what he calls a more “convential” writing job — applying to a grand total of 180 publications throughout the country.

But as J-School grads like myself are all too often aware, journalism jobs are quite few and far between (and yes, I am still quite thankful to the journalism powers-that-be that I’m one of the lucky ones — for now).

So Jason apparently decided to screw it all and go out on his own adventure, which I’m guessing will probably bring him a hefty book contract somewhere in the near future and more publicity than he expected. Jason decided to live his life entirely off Craigslist, the Web site that allows people to post jobs, sell their old wares and find romance, among thousands of other uses.

On his blog, Â LivingCraigslist.com — which is cutely designed to look exactly like Craigslist itself — Â Jason posts several updates each week about his adventures traveling all over the country, finding jobs, housing, food, friends, dates and other necessities exclusive through Craigslist.

The rules he sets out for himself:

Oh and by the way, we have confirmation that this guy is, in fact,Â Jewish, as documented in his first foray into the world of Southern Baptism.

“I never expected to sit in the front row of an all-black Baptist church, but I just couldn’t say no,” he writes. “I should say, I have never been to churchâ€”not unless you count touristy experiences or the one time I played my violin at someone’s wedding. I am Jewish and proud of my religion.”

I look forward to speaking to Jason further and intend to write a more detailed article about his project in an upcoming issue of The Jewish Week. Stay tuned!