Boney M in Ramallah asked not to play Rivers of Babylon 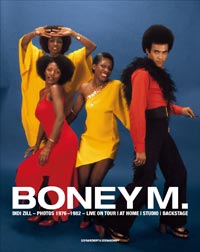 Last week in Ramallah, 70s Disco legends Boney M performed at the Palestine International Music Festival. There they thrilled hundreds of spectators with hits like “Rasputin,” “Ma Baker,” and “Daddy Cool.” But when it came to their hit song “Rivers of Babylon” the group was asked not to perform it because it was deemed to be “inappropriate.” The song quotes from the Book of Psalms which refers to the exiled Jewish people seeking a return to the ancient land of Israel. By way of explanation, The London Telegraph posited that “Palestinians often question the Jewish historical connection to the Holy Land.”

Well, for those who went and missed it, here is Boney M performing “Rivers of Babylon” circa 1978:

Benny Ziffer at Haaretz wrote a great piece called “Ra-Ra-Ramallah” wherein he describes his time in Ramallah covering the show:

On Tuesday toward evening you could see them – the trend-hunters from Tel Aviv, promenading in the streets of Ramallah, speaking English just to be on the safe side, without realizing that their Israeliness sticks out a mile, in the way they walk, in their body language. They came for a performance by Boney M which was due to start at 8:30 P.M. in the plaza of the Ramallah Cultural Palace. It is doubtful whether they would have bothered to go to a nostalgic performance like this if it had taken place in Tel Aviv. But in Ramallah, it’s a different story. It feels dangerous, it embodies a whiff of the longing for a world without barriers and fences and separation walls. Come to Ramallah to dream of a better world… This is an enclave within an enclave, and here too the naked eye detected a table of Israeli diners trying to look like someone or something they weren’t, until a noisy gang of beer-drinking young Palestinians at the adjacent table shattered their illusion and spoke to them in fluent Hebrew. One of them called out to me: “Kol hakavod [good for you] – you have a big heart for coming here. We hate Israel.”

Heh. Boogie on down Palestine!