If You Throw a Stone into the Red Sea… 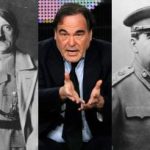 There is that old question that has plagued humans for eternity, if your throw a blue stone into the Red Sea, how will it come out?

And what if the stone is Oliver Stone?

Last Sunday in The Times of London, the film director and Wall Street scion had some pretty nasty things to say about Jews and the Israel lobby in America. He said that Hitler did more damage to Russia than he did to the Jews, that Israel “f**ked up” American foreign policy, and some other choice items. Earlier this year, he mentioned that Hitler was an easy scapegoat for industrialists. What was perhaps worse were the comments added to internet blogs that agreed with him, and went much further. Stone was quick to apologize after the article appeared. He said his comments were “clumsy.” But the backlash has not ended.

Word on the street is that Ari Emanuel and Haim Saban, two Hollywood leaders with roots in Israel and the Jewish community, have individually reached out to CBS and asked if it is appropriate for CBS’s Showtime media property to broadcast Stone’s upcoming 10-part series, “A Secret History of America.” Saban reportedly hopes that Stone and Mel Gibson should both be retired from Hollywood.

Where are my linen garments so that I can banish them?