Hebrew University: Find me somebody to love! 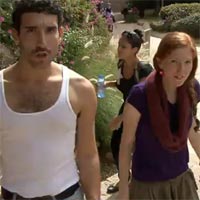 Idan Gorsky, a 3rd year law student at the Hebrew University of Jerusalem and dozens of his friends got together to shoot the following lip dub, an hommage to Queen’s song “Somebody to Love” shot in one take on the first day of School. Yeah, University here starts after the high holidays, not in September. What’s the point of a Jewish state otherwise?

So Gorsky, who appears as Freddy Mercury at 4:04 of the video, emailed Brian May of Queen, letting him know about it and, remarkably, May responded:

Hi Idan
Well, even though I am way behind in EVERYTHING today — I watched the video, and I have to say, among all the grimness of today’s world, this is a breath of fresh air. I – unexpectedly – got quite a lump in the throat. It’s very well done, with great heart and joy, and I’m sure Freddie would love it. Well done to all … it’s quite something to pull all this off in a single shot. I’m sure there are no edits in this at all.

All the very best to all involved, and thanks for alerting me. I will publish this on my site, if that’s OK with you … (yes, you look good – you pass!! ha ha! )
Cheers
Bri

And even the comments, well at least so far, have been good and even edifying…

OK – I’m not Jewish, and at times I don’t really even like Israel all that much (even though I’m American) not to be all mushy but this really puts a face on folks that I thinkï»¿ are different than me. Maybe not so different ? Looks like this could have been filmed on almost any American University Campus. Next time I hear about an attack on Israeli civilians, I ‘ll think about the kids in this video & pray none of them were injured or killed. No one deserves the violence in the mideast.

With 11 “thumbs up” it seems viewers liked this comment. But tidharn took umbrage and responded:

OK, your are not Jewish you know nothing about Israel & Jewish people and still you take your right to say that you don’t like Israel. Being less ignorant would be OK for you. What did you think that we are riding on camels on our way toï»¿ the Campus? or maybe you thought that we are killing one Arab baby each morning before our class because that what they told you in CNN

Sigh. Welcome to Israel. OK, gotta go. Gonna hop on my camel and grab an Arab baby shwarma for lunch. Yum! The occupation is delicious. And remarkably tender too!