When Rachel Weisz, 39, announced last month that she was ending her nine-year relationship with her husband, producer Darren Aronofsky, there was some speculation that she may have been swayed in that direction by her co-star in the upcoming Dream House, Daniel Craig, 42. Well those rumors have been confirmed with reports that Weisz and Craig spent the holidays holed up together in a cottage hideaway in a secluded snow-covered Dorset village.

And according to one onlooker, they â€œlooked like a romantic couple in a film … They were laughing and chatting and hanging on to each other’s words and stopping to take photos of each other,â€ the source told the Sunday newspaper. â€œThey were clinging to each other like honeymooners. The chemistry was obvious.â€ 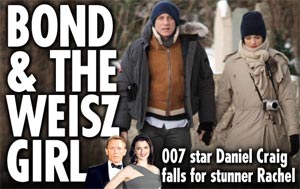 Well at least the kids will be Jewish

There was no word about what, if any Christmas celebration took place. Weisz, of course is Jewish and has a 4-year old son, Henry with Aronofsky. Despite playing high profile Jewish roles, ie, a Polish Jewish partisan in Defiance, an American Jewish soldier in Fateless and a Mossad agent in Munich, Daniel Craig is not Jewish. Perhaps Weisz took the advice of the writers of Jew Or Not Jew to lovelorn Jewish women disappointed with Craig’s total lack of Jewish pedigree:

So, attractive female Jewish readers of JONJ (and if you’re Jewish, female and reading JONJ, then you’re attractive), here is your mission: fly to England. Pry Mr. Craig from whatever supermodel he’s currently dating. Then marry him, make sure that he converts to Judaism, and have a lot of blond, steely-eyed, Jewish babies.