Israel has been at less than it’s best behavior during Justin Bieber’s visit ahead of his show in Tel Aviv tomorrow night. Yesterday according to the Bieber Zone, he visited the beach in Tel Aviv beach with his parents and crew members, played matkot (paddleball), rode a scooter and had a late lunch. While on the scooter, fans caught him, and started screaming, attacking and yanking at him. He was spirited away by his bodyguards before the crazed teen fans got a chance to tear him apart limb from limb. 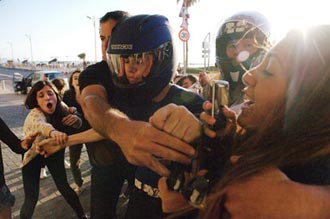 Nice. Not really. Also not nice? Israeli Paparazzi who have been making Bieber’s visit kind of unpleasant. Bieber took to twitter to vent his frustration at the legion of photographers trying to score a great photo of the teen heart throb that they can sell for like, $50:

You would think paparazzi would have some respect in holy places. All I wanted was the chance to walk where jesus did here in isreal [sic.] … They should be ashamed of themselves. Take pictures of me eating but not in a place of prayer, ridiculous … People wait their whole lives for opportunities like this, why would they want to take that experience away from someone … Staying in the hotel for the rest of the week u happy? … It’s not the fans, and some of the paps were nice enough to leave. But some people just don’t have respect…

Another tweet reflected some frustration he may have had thanks to the presumptuousness of our Prime Minister: “i want to see this country and all the places ive dreamed of and whether its the paps or being pulled into politics its been frustrating.” What was Bieber talking about? Well, see, he was scheduled to meet with Prime Minister Benjamin Netanyahu.

According to Haaretz however, Netanyahu cancelled the meeting after Bieber allegedly refused to meet with kids who had almost been blown up by an anti-tank rocket fired from Gaza at their school bus. Some PR people in Netanyahu’s office figured it would be great to have those kids meet with Bieber. The question is, did they check with the Bieber camp in advance to make sure that was ok with the harried singer? Did Bieber refuse to meet the kids for political reasons?

But a person involved in arranging the meeting on behalf of Mr. Bieber said that the discussions had been called off for logistical, not political, reasons and that it was more a case of miscommunication than anything else… Both sides agreed that plans for a meeting had never been finalized… A spokesman for Mr. Bieber said, â€œJustin welcomes the chance to meet with kids facing difficult circumstances, regardless of their background, and in fact, he had already invited children from the Sderot area,â€ referring to the Israeli town near the Gaza border, to attend his concert in Tel Aviv on Thursday.

My guess? No one at Netanyahu’s office cleared the proposed meeting with Bieber and Bieber found out about it after the fact. His people might have been simply put off by the perceived presumptuousness displayed by the flacks intent on maximizing the PR opportunity. Bieber is Canadian after all. Canadians like decorum, Israelis like acting like bulldozers. What actually happened? We’ll probably never know the details for sure, but it’s a safe bet that the PMO fucked up an opportunity to create some good will for Israel with the international teeny bopper set. Well at least Bieber didn’t boycott the show despite this clever video by douchebag anti-Israel York U. professor John Greyson: