Someone in the crowd shouted that she was an Israeli, a Jew. Neither is true. But to the mob is was a match to gasoline, the savage assault turned into a murderous fury. 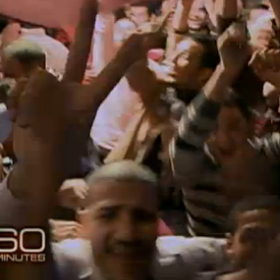 Logan describes seeing flashes as Egyptians took photos of her rape with their cell phone cameras. Her clothes had been torn to shreds, the mob was trying to tear the hair off her scalp and as Logan describes “I didn’t even know that they were beating me with flagpoles and sticks because I couldn’t even feel that, because the sexual assault was all I could feel, their hands raping me over and over and over again … from the front, from the back …”

Logan was miraculously rescued by Egyptian soldiers and flew back to the US the next morning. She had to spend 4 days in the hospital recuperating from the assault.

In an attempt at even handed reporting, Scott Pelley noted that the perpetrators of the attack were never apprehended and that it would be difficult to determine if they were regular Egyptians or regime provocateurs. My guess is that given the celebratory cell phone photography, they were not likely “professionals.” I know I’ve been to Egypt many times and have always been treated with great hospitality. But then again, I am not a defenseless woman in a mad, frenzied crowd in a country where sexual harassment and assault against women are rampant. Logan noted:

I had no idea that it was so endemic, so rife, so widespread, that so many Egyptian men admit to sexually harassing women and think it’s completely acceptable and in fact blame the women for it.

I have to say that I am completely disgusted. I know that this isn’t representative of all Egyptians, but hopefully, the new democratically elected government of Egypt will take some time and try to deal with this issue in a productive manner. Unless of course they are too busy plotting with Hamas and Iran and trying to undo 35 years of peace with Israel. Oy.