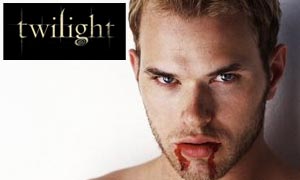 What do a political talk show host, a â€œTwilightâ€ star, a Hollywood character actor, a Columbian pop singer, and a former member of Latino band Menudo turned solo singer have in common?

If you’re expecting to find the answer on the E! channel, you may be watching television for a while; however, if you however guessed that John Carlson, Kellan Lutz, Miguel Ferrer, Carolina la O, and Didier Hernandez are all currently taking part in the most recent America’s Voices in Israel mission to the Holy Land, give yourself a pat on the back.

Relaunched this year, America’s Voices in Israel brings high-profile figures from the United States to Israel to see images not typically broadcast in the world media.Â  (I’ve been here for five years and have yet to ride a camel nor dodge bulletsâ€¦.maybe I’m just lucky.)

Thursday morning, the group got together at Jerusalem’s Inbal Hotel for a Q&A session with some local media members.Â  In what should not be at all surprising to readers of this blog, the feedback was overwhelmingly positive.

Why come to Israel?Â  First impressions?

Kellan Lutz, who played Emmett Cullen in the â€œTwilightâ€ series and was named one of People Magazine’s sexiest men alive:

â€œThis is actually my second time here; I came last year for a personal trip.Â  I wanted to do something new and intriguing.Â  I was very ignorant as to what Israel had to offer.Â  When I told my friends I was going for a week, they thought I was nuts.Â  I just felt that Israel is home to the most historical sites in world.Â  I love history and really wanted to see it. 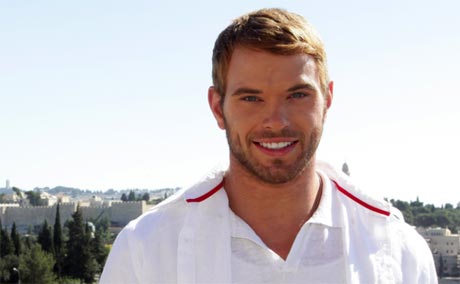 That is one hot vampire. (Photo credit: Yissachar Ruas)

I met the most kind, loving people I’ve ever met in life.Â  They really educated me and took me around.Â  It was a blessingâ€¦.I didn’t realize how much there was to do in Israel.â€

â€œThe perception of Israel in the US and in Hollywood is one that’s very dangerous, very unstable.Â  I really never thought I’d come here until this opportunity arose.Â  I am so so so glad to be here.

The enormously diverse culture where people can agree and disagree is just amazing, and to learn about the events that took place here over millennia has been fantastic.Â  It’s a trip I’ll never forget.â€

Carolina la O, popular Columbian salsa and tropical music singer who has reached the top of the charts in America, Puerto Rico, Venezuela, Ecuador, and Peru.

â€œFor me, my family, and my neighbors in Columbia, to come to Israel is a dream come true.Â  I can’t believe that I’m here.Â  Every single morning when I wake up and look out the window, I can’t believe itâ€¦Israel is a real paradise.â€ 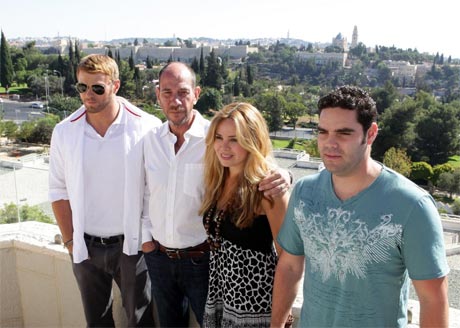 Well, that’s great to hear.Â  So what should people around the world know about this place?

â€œMostly I think people are not informed of the way this country has developed and the way people are here.Â  The last two days have been great.Â  We’ve met incredible people and seen amazing sites.â€

â€œThe most surprising aspect about Israel, Jerusalem in particular, is how safe people feel in their everyday interactions.Â  You can tell when people are on edge in an unsafe neighborhood.Â  You just don’t get that feeling walking around here. The coverage in the American media is one of conflict and tension.Â  People are much more at ease than I had expected.â€

Kellen:Â  â€œMy friends who thought I was crazy, they just don’t know what’s going on.Â  The media misconstrues information and fills our heads with stuff that’s not true at all.Â  I’m having so much fun, the people are amazing.Â  I love it here; I hope I can come back every year.

Carolina: â€œBeing from Columbia, I understand what it’s like to have people around world saying, â€˜how can you live there?’Â  I see that you are an amazing people in an amazing country.Â  It’s time for the world to visit Israel to see for themselves. This is a perfect country to visit with family and friends.â€

Didier:Â  â€œYou get the impression from abroad that things here are crazy and that people are rude and aggressive.Â  People are more laid back here than the way they’re portrayed.â€

Please tell me you got to Tel Aviv. Thoughts?

Kellan:Â  â€œThe New York lifestyle.Â  The clubs are amazing, the food is amazing.Â  We even went to this BlackOut restaurant (Na Laga’at in Jaffa).Â  I had never experienced something like that; so great that they have a place for the deaf and blind to be employed, some of the best actors I’ve ever seen.

Miguel:Â  â€œI’m glad we were able to visit to really see disparate worlds within this country, a juxtaposition of a very modern city next to a very ancient city and to see how those two worlds can function beautifully.â€

John:Â  â€œI hope people come here.Â  If they do, they’ll be surprised by how open, safe and welcoming Jerusalem is and how diverse Israel is as a nation.Â  This is a wonderful place to visit for more than just history and religion.

Miguel:Â  â€œYou guys have done the impossible over and over and over again for last 5000 years.Â  This has been so much more than I ever anticipated.Â  It’s been very humbling to be part of it.â€

Oh, and as Kellan let me know, Bar Refaeli is again off the market so don’t expect that beautiful couple to happen.Â  â€œShe’s a beautiful soul inside.â€Â  Takes one to know one.Â  Thanks for the visit, guys!