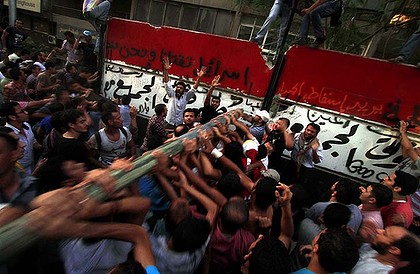 There was a pogrom in Egypt Friday night.

The intentions of the mob were obvious. According to eyewitness, Rev. Giovanni Esti – a Catholic priest and missionary of the Comboni orderâ€” “We saw the group that attacked the Israeli embassy. It is hard to think that it was a spontaneous event. It was a planned event. This attack was carried out by recruited football fans. What is most disturbing is that the embassy was not adequately defended,” said the missionary.

Had the Egyptians penetrated the Israeli Embassy’s last security door, they would have set upon and likely killed anyone they found. The rioters smashed the offices, and tossed equipment and files to the streets. Although some of the details are unclear, the 85 members of the diplomatic core and security agents were evacuated by Egyptian commandos to the airport and flown to Israel on military jets.

The Israeli Embassy, a symbol of peace and normal diplomatic relations lay trashed and occupied until the morning by the rioters. 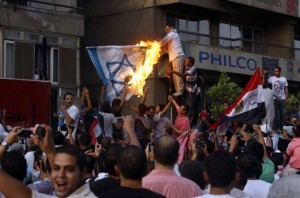 They had tried before.

On Saturday, August 20th, they attacked the building, and one Egyptian managed to scale the twenty-story building to replace the Israeli flag with an Egyptian one.

The Egyptian military authorities then built a 12 foot high security wall – but that only seemed to have enraged them.

On Tuesday, August 23, organizers of the attack called for a million-man march on the Embassy to call on Egyptian authorities to kick the â€œZionistsâ€ out.

One week later, on Tuesday, August 30th, marking the first day of the Muslim feast Eid Al-Fitr, thousands of Egyptians held a massive protest in front of the Israeli Embassy. This time Egyptian security forces had been increased and no one managed to infiltrate the grounds of the embassy building.

However, on the night of Friday, September 9th, at the start of the Jewish Sabbath, the rioters came with enough people, battering rams, tools, and weapons to actually succeed. There were no Egyptian security people there; they also attacked a nearby police station.

The attacks on the Israeli Embassy according to many were premeditated and planned, and the organizers were waiting for the right moment. With the death of three Egyptian soldiers on August 19th during clashes between Israeli soldiers and terrorists on the Israeli Egyptian border, they found the provocation they needed. Despite Israel’s immediately issued an apology of deep regret over the deaths and a vow to convene a joint Israeli/Egyptian investigation, the organizers had all they need to provoke angry mobs to do their bidding.

Up until then, those who had been calling for the removal of the Israelis relied on Egyptian anger over Israel’s close relationship with Hosni Mubarak.

“I insisted on climbing on the roof and take down the flag of the Zionist entity,â€ said Ahmad A-Shahat to Al-Jazeera, the one who scaled the Israeli Embassy on August 20th, â€œbecause that was one of the goals of the revolution â€“ to depose Mubarak and all his friends, among them the Zionist entity.” .

The series of events that took place follow a predictable pattern common of pogroms, when emotional hatred against Jews can be physically acted out.

Those who perpetrate pogroms â€” a Russian word to describe a form of violent riot against a particular minority group â€” aim to not just murder, maim, and defile, but also to destroy property, homes, institutions, sacred objects. Without the safety of a place to live or work, the hated are unlikely to return.

Pogroms have been instigated by accidental deaths, but often don’t require an actual victim. Rumors, prejudice, and jealousy often suffice. With enough preparation, it doesn’t take much to inflame the passions of those already predisposed to hate.

Pogroms are often orchestrated by governing authorities to divert attention from the cruel poverty, repression and unfulfilled promises of the government. Pogroms are also notoriously organized by opposition groups to destabilize governments. What transpired at the Embassy was not spontaneous and it will be interesting to see who the authorities eventually blame for the Pogrom.

There are many questions that remain unanswered about this pogrom:

Why was Egypt lax in protecting the Israel Embassy that night when a Facebook event announced the intentions of the mob? Did the Muslim Brotherhood have a hand in organizing the attacks and if so, what are the repercussions? What is the fate that awaits Egypt’s persecuted Coptic Christians? Who is to benefit from the re-imposition of martial law?

Not all Egyptians support the rioters and the pogrom.

Egyptian opposition leader Wael Ghonim wrote â€œwhat we are witnessing now is contrary to what I dreamt of. We need to wake up quickly.â€ He is joined by millions who do not want to see their new-found freedom undermined by undemocratic Islamic groups.

However, when it comes to bigotry, hate, and prejudice, it is difficult to undo quickly what generations of propaganda have instilled. When it comes to anger over socioeconomic trouble, nothing is better than a scapegoat.

Thanks in part to televised dramas and other programs, many in the Arab world believe that Jews use blood in bizarre matzoh rituals, desire world domination, and use sorcery and witchcraft. The fall of dictators has destabilized local economies. Add to this poisonous mix the belief that Jews occupy Muslim land and holy sites, and there is fertile ground for greater and more pogroms, perhaps culminating in a new Arab-Israeli war.

Sadly, if history offers any lessons, the pogrom this past Friday night is a precursor for how Jews and Israel will be treated on the streets of â€œliberated countries,â€ and in diplomatic hallways around the world for some time to come.

Unless stopped by internal forces, these attacks may continue until all vestiges of Israel are gone from Egypt and elsewhere in the Arab world.