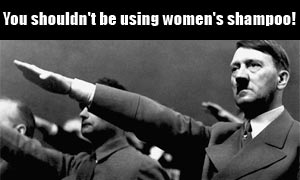 The airing of this commercial in Turkey created a bit of an uproar. The implicit message to Turkish consumers is that Hitler embodies the highest form of manliness possible. The commercial for a men’s brand of shampoo has Hitler appear to be shouting in a dubbed-over Turkish voice: “If you are not wearing women’s dress, you shouldn’t be using women’s shampoo either!” Of course the Jewish community in Turkey, not known for complaining too much, complained none the less: “The Chief Rabbi’s office called Hitler “the most striking example of cruelty and savagery” and said using his image in a commercial was unacceptable…” The rabbinate got in touch with Istanbul-based Biota Laboratories, manufacturers of Biomen shampoo and asked them to pull the ad. The company however claimed that the ad’s message is humorous and has so far refused to remove it. The Anti-Defamation League said it was “repulsed” by the use of Hitler’s image to sell shampoo: “The use of images of the violently anti-Semitic dictator who was responsible for the mass murder of 6 million Jews and millions of others in the Holocaust to sell shampoo is a disgusting and deplorable marketing ploy,” said Abraham H. Foxman, the ADL’s national director.

I don’t know what Biota Labs was thinking when they aired this commercial, but their bad taste sure has gotten them a lot of publicity. Turkey has a mere 20,000 Jews so perhaps they felt there was no harm in alienating this market segment for the sake of a “funny” commercial. I mean, did Hitler even have nice hair? Aren’t most of his fans skinheads?? I don’t know much about Turkey but I’ve seen Midnight Express, the 1978 movie featuring a horrific Turkish jail, and based on that it seems to me that very few people in Turkey actually use shampoo at all. Am I missing something here or what?

Ok, ok I’m kidding. In my experience Turks are lovely people. And very clean as well. Hopefully stupid Biota Labs will do the right thing and pull the ad.