Girls and the Jews: Must See TV for Jewish Professionals and Philanthropists 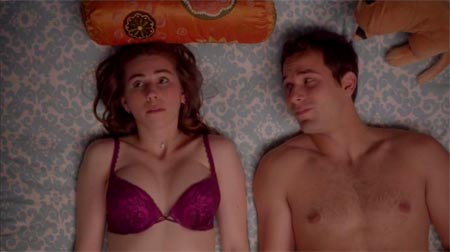 Girls is a new television show on HBO that has been getting a lot of media attention. It’s a story about four 20 something women living in New York and it’s kind of billed as this generation’s Sex and the City, but, you know… more real – none of the fabulousness and all of the narcissism. Much of the attention has been critical – nepotism has been mentioned for instance. Lena Dunham, the show’s 24 year old creator and lead character Hannah Horvath, is the daughter of famous artist / photographer Laurie Simmons. Allison Williams who plays Hannah’s room mate Marnie Michaels, is the daughter of NBC Nightly News anchor Brian Williams. Zosia Mamet plays Shoshana Shapiro and in real life is the daughter of playwright David Mamet. Her cousin and room mate on the show is Jessa Johansson, played by Jemima Kirke, the daughter of Simon Kirke, the former drummer of the rock band Free which is best known for the song All Right Now (Baby it’s all right now). Having watched the show, I am pretty sure the accusations of nepotism are ludicrous because all the actresses involved perform quite adequately.

Another critique involves race – the show has no main characters of color despite being set in New York. This however, for better or worse, reflects the limited experience of 26 year old Dunham. And at least she was savvy and honest enough to confront that in a recent interview on NPR’s Fresh Air, where, according to Crushable she stated:

I wrote the first season primarily by myself, and I co-wrote a few episodes. But I am a half-Jew, half-WASP, and I wrote two Jews and two WASPs. Something I wanted to avoid was tokenism in casting. If I had one of the four girls, if, for example, she was African-American, I feel like â€” not that the experience of an African-American girl and a white girl are drastically different, but there has to be specificity to that experience [that] I wasn’t able to speak to. I really wrote the show from a gut-level place, and each character was a piece of me or based on someone close to me. And only later did I realize that it was four white girls. As much as I can say it was an accident, it was only later as the criticism came out, I thought, â€˜I hear this and I want to respond to it. And this is a hard issue to speak to because all I want to do is sound sensitive and not say anything that will horrify anyone or make them feel more isolated, but I did write something that was super-specific to my experience, and I always want to avoid rendering an experience I can’t speak to accurately.

Whew. That was a long introduction but given Dunham’s reference to Jews in her quote, it segues quite well into the issue of Jews on Girls. Dunham stated that she wrote two Jewish and two WASP characters. I’m not so sure about that. Dunham’s character is Jewish. Shoshana Shapiro (Zosia Mamet) is Jewish and Shoshana’s cousin, Jessa Johansson (Jemima Kirke), is at the very least Jew-ish. That would mirror Kirke’s real life parentage – her maternal grandmother is Israeli and her grandfather is British businessman and Iraqi Jew Jack Dellal. You know the Suzanne Dellal Centre in Tel Aviv? Home of the world famous Batsheva dance company? That was built by Dellal in honor of his sister Suzanne who passed away in childhood. That’s pretty darn Jewy if you ask me, halachically, culturally and any other way you want to cut it.

The rest of the article would, in all likelihood, make older people’s heads explode and it makes our posts on the topic of sex and Birthright pale in comparison. The point of this digression is that watching Girls, (and reading Vice), will lead one to understand that our generation of unaffiliated Jews is tremendously narcissistic, self-entitled and self-involved. Most of us have little or no daily connection to our Jewish heritage. And we mostly have remarkably bad sex!

Witness the Jewy part of season 1, episode 4 of Girls titled “Hannah’s Diary.” Shoshana runs into a guy she went to Camp Ramah with. After reminiscing for a bit, they went back to Shoshana’s place where they watch a movie. in an earlier episode, Shoshana bemoans the fact that she is still a virgin and she decides that her fellow Camp Ramah alum is going to be the guy to pop her cherry. They start getting it on and, after some extremely banal dialog, she tells him that she is a virgin. He then refuses to have sex with her because he doesn’t “do the virgin thing” because virgins get clingy. Thus, after 4 episodes, the only manifestation of anything Jewish on the show is… this. A young Jewish woman from the suburbs who wears Juicy couture sweats and loves Sex and the City. A young Jewish man who “loves to eat pussy,” thinks Long Island girls are at least as hot as city girls but is grossed out by clinginess and virgin blood. Doesn’t it just make you want to projectile vomit? And you probably haven’t even read the aforementioned Vice piece yet. Read it. The thing is that these dramatic scenes and first person narratives are dead on about young Jews today.

Those wishing to inspire Jewish affiliation among this crowd have an unenviable and extremely difficult task ahead of them. Peter Beinart will have you believe that this generation doesn’t affiliate with the organized Jewish community because they are turned off by the communal policy of blind support for Israel. I wish. Peter Beinart is clueless like a Dad. They don’t affiliate because they have little or no Jewish education and they live in an era of instant gratification, 140 character text messages, always on smart phones and human interactions with the depth and nuance of facebook chat.

You want to know what we’re like? Now you know. American Jews are SO over.