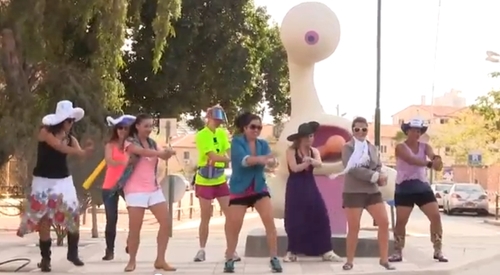 Thankfully, Israelis have not been left out of the Gangnam Style crazing that has swept planet Earth this Autumn. As a k-pop fan, I feel it is my duty to report on Israel’s version of the popular dance, attitude, song and video that was made famous by PSY, a Korean musician. The song is a parody of the style and social expectations of residents of Seoul’s most exclusive post-War Gangnam area (think Beverly Hills and Beverly Hills Post Office, with a little Old Greenwich, Darien, Palm Beach mixed in).

The original video, with over 660 million views on Youtube is here.

There are also hundreds of fantastic parody versions from places including the Berkeley, California, The Massachusetts Institute of Technology featuring the MIT Logs and a smug Noam Chomsky, UCLA Hillel, Annapolis, and more.

Among the best Israeli parodies are:

A Negev Style video made by students by students at the Medical School for International Health at Ben Gurion University in Be’er Sheva.


Israeli in Tel Aviv with No Friends Style

And among the worst, with over five million views is the following from AgentKMedia. known as Jewish Style. But perhaps penis, rabbi and nose jokes just don’t carry cross cultures.

And a Gamba red pepper style video that seems lazy.