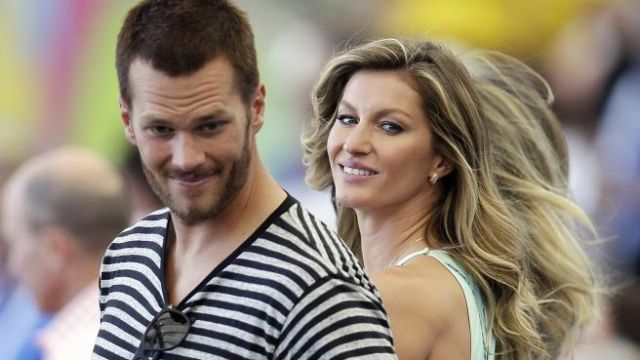 Welcome to our Lord, King and Messiah Tom Brady! All hail to the new lord and master, God’s own ordained ruler of Planet Earth and the human race.

Some people may say that I am going a bit too far. But talk about miraculous! Tom Brady now has five Super Bowl rings and seven total Super Bowl appearances. Can there be any more proof needed of his divine nature and the heralding of the end of days.

So my apologies to all of those Lubavitch out there who are still holding out hope that their last Rebbe, the late Rav Menachem Mendel Schneerson, was the actual Messiah. Sorry guys but what exactly did the last Lubavitch Rebbe do in his 90 years on this Earth that in any way compares to what Tom Brady has already done in just 39 years.

Five Super Bowl championships people! Get that through your thick skulls! Albert Einstein, Sister Teresa, George Washington, Moses, Howard Stern …they all pale in comparison to Tom Brady. None could ever have dreamed of achieving the level of sanctity to which the New England Patriots quarterback has reached.

Is it just a coincidence that Robert Kraft, the man who bought the Patriots just before the team started its run of seven Super Bowl appearances in 15 years, is a Jew? I don’t think so.

Speaking of Robert Kraft, he was so filled with religious inspiration by Tom Brady’s performance in the Super Bowl that he became a repentant Jew. Kraft is already wearing a black hat, is growing a beard and is giving all of his money away to yeshivas in Israel.

Tom Brady threw for 466 yards and two touchdowns, plus a two point conversion. Is that not enough for you? Well he also led the Patriots back from a 28 – 3 deficit with 25 unanswered points to tie the game in the last minute of play.

Do you need even more proof? Well Tom Brady just so happens to also be the first man to win a Super Bowl which went into overtime. That’s right! It took 50 years for there to be an overtime Super Bowl and Tom Brady won it.

Reports are already coming in from all over the world about other miracles related to Messiah Tom Brady. A 56 year old mother of five in Bismarck, Montana, was munching on a bag of sour cream and onion potato chips as the game went into overtime. Just as she was about to sink her teeth into the last chip in the bag she noticed that it was shaped in the exact image of Tom Brady.

So she made a blessing and placed it in front of the television and then the Patriots won. The Catholic Church has already dispatched a team to verify this miracle.

An orthodox rabbi in Cleveland Ohio dreamed Friday night that the spirit of King David spoke to him and revealed exactly what would happen in the Super Bowl. King David also told the rabbi that this would be a sign that Tom Brady is the Messiah. The rabbi, though, was also told not to reveal any of this until after the big game was over so as not to give any gamblers an unfair advantage.

And have you heard the words of praise spoken about Tom Brady in the hours after the big game ended?

The Pope has announced plans to beatify him saying, “Mr. Brady’s accomplishment is nothing short of a miracle. I will also be calling for a new conclave of the College of Cardinals to appoint Tom Brady to a new position above that of Pope.”

All the factions involved in the Syrian civil war have now agreed to sit down together for new peace talks. Even ISIS has agreed to a new cease fire issuing a statement which read, “Mr. Brady’s leadership of the New England Patriots in their come from behind victory in the Super Bowl was such an unbelievable inspiration that we have been forced to rethink our entire view of the West and its culture.”

“Surely this is a sign,” the statement continued, “that we have been wrong this whole time.”

Both Israeli and Palestinian leaders have formally asked Tom Brady to come to the region and act as a mediator in their dispute. Both groups have pledged to abide by any decision which he might make. A poll just conducted by the UN in the Gaza Strip shows that 93 percent of the people there would even agree to relocate to New Jersey if that is what Brady decides. Another 6 percent said anywhere but Jersey and the remaining 1 percent thought that they were already living there.

Need more proof of the miracle in Houston? Since the game ended, global warming has reversed with millions of gallons of water rising out of the oceans and returning as ice to the arctic glaciers. Fox News has hired Michael Moore to do his own prime time show and Donald Trump issued a new executive order prohibiting any sexist speech or behavior which can be construed as sexual harassment by anyone in the Federal government on pain of death.

Yes folks, we are living in the end of days.

So all hail our Lord, King Messiah Tom Brady!