Some of our older but still vibrant readers may remember a time when music was purchased on a circular disc or rectangular piece of plastic at a retail store in exchange for a primitive form of paper currency known as “cash”. And even then, toward the end of ye olde 1900s, consumers had begun to find the abundance of selection daunting. Then came the internet, and with it an exponentially augmented distribution system that not only allowed listeners to seek out the sounds they crave but for any artist to brazenly self-promote to those and other individuals. To paraphrase the ever-astute Dennis Miller “It’s like a 2 for 1 suit sale at K-Mart. Hey, 2 of shit is merely 2 times as much shit!”. But inevitably amidst the virtual stacks of wack tracks, something emerges that is both familiar and fresh, seductive but sincere. 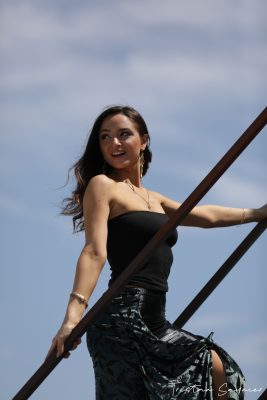 Introducing Nicole Raviv. Montreal born and raised to Israeli immigrants, she is now pursuing her musical dreams in the Big Apple, USA. Raviv, who is entirely capable of channelling the perfect pop stars of her day, chooses instead to transport us historically and culturally with her earnest brand of middle-east-infused modern pop. In addition to the traditional triple threat of voice, performance, and dance, the qualities that separate a star from the masses of undeniable talent are taste and work-ethic. Raviv has been gifted with all 5. A quintuple threat.

Nicole displays a precocious wisdom in her ability to expose her vulnerability and project genuine emotion in her lyrics and melodies. Her innate desire to affect and inspire change is manifested through an energetic spirit that resonates with listeners in the most simple and positive of manners. On stage, she possesses a breezy quality as she embraces her audience with an approachable energy. But as the relationship grows into mutual appreciation, Raviv can be seen unveiling fragments of the memories and events that forged her artistic soul. It is there that the exotic queen emerges from within, and brandishes the scepter that unites them. But then, with a giggle and a wiggle, the inner-child pops up to break the tension and it is that very dichotomy that will undoubtedly keep live spectatorships growing.

In fact, Nicole has just released her newest single. Written by Raviv with the help of Mashiach… Wait. Not that one. This is Tal Mashiach; Israeli multi-instrumentalist and composer. Entitled “Angel”, it is Raviv’s profoundly personal tribute to her late Israeli grandfather. The track is a melodic interpretation of those traditional folk songs from Israel’s happiest days, infused with her own millennial vibe. Lyrics alternate between English and Hebrew, and the video which launched this week, is replete with imagery from Raviv’s own past, blended seamlessly with depictions of the heritage we as a Jewish nation share. Check it out, and spread it around.

Hockey fans may know her as the woman that sings the anthems at New York Islanders’ games but to her friends, family, and fans, she is something else: A tireless hustler and ever-evolving artist who has likely yet to scratch the surface of her true potential. And when that day is come, and success is at her doorstep, it will be not through looks, or moves, or even voice, but in her truth. The recognition that she is more than just another fame-seeker with shallow expressions of pseudo-individuality, rather a humble contributor to the interminable spirit of a nation and it’s people.
Well that’s my hope anyway, or as they say in Hebrew… Hatikvah.

Mike Benhaim is a renaissance man of media who has paid professional dues as a DJ, comic, music blogger, and columnist for a national Canadian newspaper. Readers with a taste for the occasional indignant rant can find more at benhaimparadigm.com or follow him on Instagram @mike_benhaim