Do you really need a weatherman to tell you which way the wind is blowing?

But I do know that every American Jewish community professional has been waiting the release of the Pew Research Center’s study of Jewish Americans which will be released on May 11, 2021.

U.S. Jews are less “religious” than American adults overall. 12% responded that they attend religious services at least weekly in a synagogue, temple or less formal setting This compares to 27% of all U.S. adults.

When asked if religion is “very important” to them, 41% of non Jewish U.S. residents said Yes. 21% of U.S Jews said Yes. Therefore, one can say that U.S. Jews are less likely than the overall U.S. public to say religion is “very important” to them (21% vs. 41%). Slightly more than 50% of U.S. Jews say religion is “not too” or “not at all important” in their lives. About 34% of other Americans say the same. 26% of U.S. Jewish responded that they believe in God “as described in the Bible,” while 56% of all U.S. adults say this.

Jewish Americans favor the Democratic Party, but Orthodox Jews do not.
The survey, conducted before November 2020, found that 71% of Jewish adults (including 80% of Jews who identify of Reform Jews) are Democrats or independents who lean toward the Democratic Party. But among Orthodox Jews, 75% responded that they are Republicans or lean toward the GOP. In 2013, only 57% of Orthodox Jews were Republicans or Republican leaners (but at the Passover seder, they lean more).
Over 80% of Jewish Republicans responded that President Trump was friendly towards both Israel and Jews.
While 55% of Jewish Democrats responded that President Trump was friendly towards Israel, only 13% thought he was friendly towards Jews.
85% of Orthodox Jews responded that Trump’s policies towards Israel were “Excellent or Good.” 42% of Conservative movement Jews and 36% of Reform Jews agreed with that statement.
About half of American Jews under 30 years of age thought Trump’s policies towards Israel were “Poor.”

Despite these experiences with anti-Semitism, Jewish Americans tend to say that there is as much
– or more – discrimination in U.S. society against several other groups, including Muslim, Black,
Hispanic, and LGBTQIA Americans, as there is against Jews.

72% of U.S. Jews engage in cultural activities like cooking Jewish food
62% reported that they share holidays with non-Jewish friends
57% reported that they visit historical Jewish sites
44% said that engage with Judaism through Jewish media by “often” or “sometimes” reading Jewish literature, history or biographies
43% said that they watching television with Jewish or Israeli themes (not including Seinfeld)
42% said that the read Jewish news in print or online 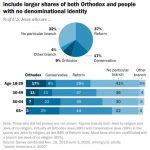 Among younger Jewish adults (ages 18-29),
17% identify as Orthodox (compared to 3% for those over 65)
41% don’t identify with any branch, of consider themselves “Jews of no religion” – but are Jewish culturally, ethnically or because of their family background. 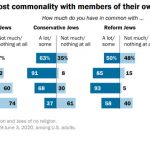 Regarding synagogue/temple/shul attendance…
Of the 20% of American Jews who say they attend synagogue services (before the pandemic) AT LEAST ONCE A MONTH,
92% said that they “find it spiritually meaningful”
87% said “Because I feel a sense of belonging”
83% said “To feel connected to my ancestry or history”
65% said they feel a religious obligation (87% of Orthodox Jews responded to this)
42% said in order to please a spouse
22% said out of guilt

Of the 80% of respondents who said they do NOT attend often
67% said “I’m not religious”
57% said “I’m just not interested”
55% said that they “express my Jewishness in other ways”
7% said that “I don’t feel welcome”
4% said “People treat me like I don’t really belong.”