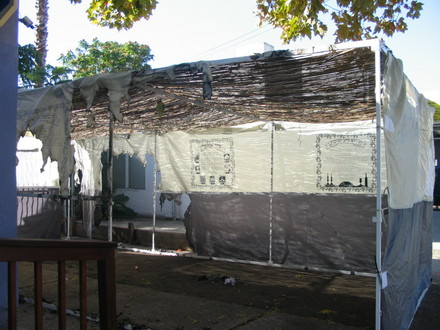 Two campus sukkot (that is plural for sukkah) were vandalized over the holiday. Hillel of Silicon Valley’s sukkah was torched. Chabad at UC Davis’s sukkah was defaced with anti-Israel slogans. The start of another year of tolerance for Jews on campuses in California is in the air.

Student Programs and Activities Center representatives reported a hate crime yesterday, as graffiti was found defacing a small hut on the Quad being used for a Jewish holiday….

The graffiti was discovered by SPAC and then reported to several organizations on campus, including the UC Davis Police Department and Hillel. Mike Amerikaner, program director of Hillel, said that the vandalism is unrelated to the holiday, though it made reference to Israel….

Amerikaner went on to add that this case of vandalism is indicative of a larger problem on campus.

“This is not something that’s new. We’ve been dealing with anti-Semitism on campus for awhile now,” he said.

And in the heart of Silicon Valley – a sukkah is torched.

Sukkot festivities ended early for Jewish students at San Jose State University after someone burned the outdoor shelter – known as a sukkah – that marks the Feast of the Tabernacles.

A student arrived Wednesday morning and found the sukkah – made of a metal frame and nylon walls – melted, said Sue Maltiel, executive director of Hillel of Silicon Valley.

Police and Hillel officials believe the fire was deliberately set but was not a hate crime. There were no notes or messages indicating anything other than vandalism, said Sgt. Mike Santos with university police, noting that the campus is downtown and vagrants often sleep on Hillel’s patio.

Sukkot activities and the Hillel got back to normal at both campuses right away.

At least I can report that the sukkot at CSU Long Beach, Chapman University, and UC Irvine stood unmolested during the holiday.

Shake of the lulav to the Oyster