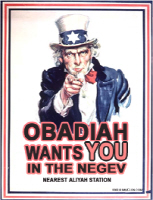 Ah, Cafepress. Second only to blog comment sections in its capacity as a repository for the loony. From Ariel Sharon as Hitler to…George Bush as Hitler to…Pope Ratzinger as Hitler to Ha-Am Im Tel Aviv (we loves ya, Mo!), all sorts of informed political commentary and cutting-edge humor can be found on Cafepress on your choice of a T-shirt, mug, mousepad, teddy bear or thong. Yes, Cafepress has opened the shmata business to the little man, and as it turns out, there was a damned good reason the shmata business was closed to the little man.

For example: today I was reading an e-mail from Jewlicious Fuhrer ck. And since I have Gmail, there are text ads on the sides of the e-mails theoretically related to the mail’s content. I guess Gmail is pretty damned perceptive, because on the side of Dave’s e-mail was an ad reading “Proclaim the prophecy of Obadiah! The Negev will belong to the Sephardim!”

One day, my curiosity will kill me.

It turned out to be link to a Cafepress store for…wait for it…Messianic…Sephardic…Puerto Rican…”Jews”. Yes. But there’s more than just spreading the Gospel of Yeshua ha-Mashiach and kosher empanadillas. Apparently it is the mission of every Messianic Sephardic Puerto Rican “Jew” to…settle the Negev.

Call the JNF! Let the power of Christ compel you!

Why is the mission of Messianic Sephardic Puerto Rican “Jews” (my mind hurts every time I have to type it) to settle the Negev? Duh. Ovadiah 1:20. Everyone knows that. Check it:

Of course, since there are pretty much no Jews left in Sepharad (that’s Spain, by the way), you would logically think this prophecy is a dead issue. But logic is not the order of the day at Cafepress. Something tells me this is one of those deals where Latin Americans decide that by virtue of being Latin American and growing up in a Spanish-speaking country, they are Sephardic Jews. Which is not to say that there isn’t a lot of Jewish blood mixed up around down there, but come on, having a converso great-great-great-great-great-grandfather is no excuse for T-shirts. Because we all know, no self-respecting Sephardi is a Messianic Jew. Messianic Judaism is for people with minimal Jewish ancestry/affiliation/knowledge trying to sucker actual Jews into frum Evangelical Protestantism on the dollar of the Baptist Church.

But back to our Messianic Sephardic Puerto Rican “Jewish” friends. What’s the only thing more rockin’ than Yeshua? Being Jewrican! Now, I was under the impression that “Jewrican” was an adjective describing the kind of parties me and my Puerto Rican homeboy Peter would have where we got drunk on tequila and made fun of whitey, but apparently it’s actually Spanish for “weird-ass Christians with synagogues churches in Florida.”

I am so confused right now.

The upshot of all this is that if a ton of Latin Americans decide they’re Jewish and up and settle the Negev, not only do we get a developed Negev, but finally, finally, it should be possible to get some Mexican food here in Israel. Ole!

Holy crap, I just realized “ole” sounds a lot like “oleh,” as in “person who makes aliyah.” Maybe there’s something to this shit after all…