Nazi Literature in the Americas 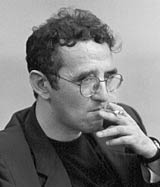 I know it’s still early but my pick for the most original novel published in English this year would have to be Roberto BolaÃ±o‘s “Nazi Literature in the Americas.”

Initially published in Spanish in 1996, the book is a work of fiction but you might not know that upon first glance. BolaÃ±o (pictured right) invented an entire literary history for a hemisphere and bound it together in this encyclopedic volume. His cast of characters â€” mostly failed and frustrated writers â€” spans generations and nationalities and BolaÃ±o sketched fine details into the biographies of these men and woman. He also connected writers with one another by explaining the impact of the same event on each one and how one influenced the other.

I’ve not read the book but from the reviews I’ve seen, BolaÃ±o’s work is something of a comedy disguised as a history with a condemnation of fascism hidden underneath.

In the Forward‘s review, literary critic Joshua Cohen expanded on this point:

Under this humor is utter seriousness: Literature, contra to its American life, is a serious undertaking. In societies in which you could be prosecuted or murdered for what you said or wrote â€” Nazi Germany, communist Russia, South American dictatorships â€” literature became imbued with a sacred or significant purpose that BolaÃ±o, in the free New Europe, was trying to revive or reinvent for changed times. BolaÃ±o’s dark intellectual-philosophical joke becomes more than the sum of its punch lines only when the author, with a sly slit of the throat, implicates himself. In the midst of genre kitsch, BolaÃ±o, the socialist revolutionary and prisoner of Pinochet, fingers a fellow poet for death and is paid for his efforts. This book, brilliantly and rambunctiously written, is a denunciation of homegrown fascism. But in its last, self-involved entry it becomes more â€” a book about how close even the most poetically pure of us can come to taint in a morally oppressive and politically wrongheaded society.

Here’s what the complete review had to say about the book:

Nazi Literature in the Americas is an astonishing work. It is a limited work, constrained by its bizarre premise, but within those limits BolaÃ±o offers a tour de force. It is about as good as a book like this could be. Yes, it is so unconventional that it is difficult to know exactly how to take or even ‘read’ it, but accepted for what it is it offers dazzling (and dazing) rewards.

Highly recommended — though readers should be aware of what they are getting themselves into: this is not your usual novel.

If you’d to read some of BolaÃ±o’s writing right now, you can find an excerpt of â€œNazi Literature in the Americasâ€ at the Virginia Quarterly Review.