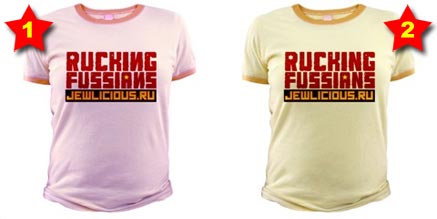 As you may or may not know, a short while back we launched a Russian language version of Jewlicious. The idea is that they take select blog posts from Jewlicious and translate them into Russian. They also write their own original Jewlicious-esque content which they share with their international, Russian speaking audience. Editor Tanya Gutsol, who I met at ROI120, and the rest of her crew seem to have been plugging away quite nicely. I have no idea what they’re writing really, but with a little help from Google translate I am fairly certain that Jewlicious.ru is not a front for some shady Russian mail-order bride operation.

As part of our desire to publicize Jewlicious.ru, Tanya decided that I should design a clever t-shirt. Thus was born the Rucking Fussian shirts you see displayed above. I originally used a Russian style font that emulated Cyrillic lettering by doing things like reversing the “N” – total nonsense of course but I thought it was kind of funny.

Well, the Cyrillic purists at Jewlicious.ru did not think so. They felt that the reverse N and faux Cyrillic would confuse native Russian speakers who would not be able to figure out that we were, you know, kidding. So to please Tanya and to settle this dispute we decided to keep both and see what you, our loyal Jewlicious readers felt. Which shirt is more, well, Jewlicious? The faux Cyrillic one? Or the normal one Tanya forced me to re-design?

At stake is my credibility and the future of who gets to call the shots around here as well as some unspecified and unimportant side bet Tanya and I have going. You may vote below or better yet, vote with your wallet and buy your favorite shirt, thus earning us $5 per sale which we will use to keep Jewlicious.ru running and to feed hungry Soviet seniors. With whatever is left over.