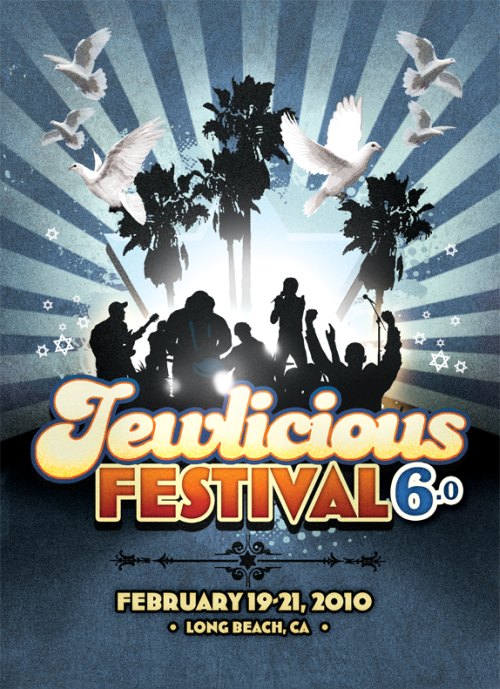 Los Angeles , CA – December 3, 2009 – Jewlicious Festival, and JConnect, in collaboration with Beach Hillel, Alevy Jewish Student Services, and Jewlicious.com are proud to announce ticket sales for the sixth annual, world-famous, Jewlicious Music Arts and Culture Festival. The three-day festival dedicated to Jewish unity will be held February 19-21, 2010, at the Alpert JCC in Long Beach, California. A list of performers and presenters will be announced in late December. Pre-sale tickets are on sale now at www.BrownPaperTickets.com.

The three-day festival has grown exponentially since it was founded in 2005. Jewlicious Festival is a right of passage for young Jews and the largest event of its kind, with 1,000 Jewish students & young adults in 2009, from over 60 colleges and universities, 20 states, and 6 countries. “Jewlicious,” writes The Forward, “is the can’t-miss event for Jewish pop stars such as Matisyahu and Jewish students of all denominations.”

“There are many ways to be part of Jewlicious,” says Jewlicious volunteer Eden Banarie, “as a volunteer, presenter or performer.” Team Jewlicious is an active volunteer core that includes work exchange, Street Team, dozens of campus reps, and a creative eco-conscious Green team. Jewlicious also invites the public to submit creative programs, music, art, film, and ideas.

Accommodations for the Festival are on-site camping at the Alpert JCC and at nearby hotels with special Festival Weekend rates. Regular passes start at $75 and up for the three day weekend and include all concerts, programs, Shabbat Meals and Sunday Breakfast, from Friday and Noon, until Sunday at 3pm. Pre-Sale tickets start at $36 for a weekend pass.

Vendor, organizations, and companies that want to be part of the Festival are encouraged to contact eric@jewliciousfestivals.com soon or call the festival office at 310-277-5544.