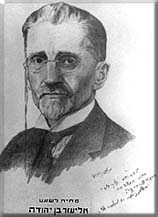 From The World:
A hundred-twenty years ago a scholar named Eliezer Ben-Yehuda, took a dead language and started adding words. Modern Hebrew is still a work in progress. The Academy of the Hebrew Language is constantly introducing new words to keep Israel’s national language up-to-date.

Israel apparently without coordinating calenders with the diaspora, has made Jan 7th Hebrew Day. The day coincides with Eliezer Ben Yehudah’s Gregorian Birthday in 1858. In Italy it is Tricolour day (Festa del Tricolore)
and in Japan â€“ Nanakusa (Seven Herbs Festival).

Read this article in YNET — sounds like the good old socialist days in Israel — but it is Bibi in charge!

The government announced on Sunday a number of moves for the strengthening of the Hebrew language. As part of the plan the birthday of Eliezer Ben Yehuda, known as the reviver of Hebrew, may be announced as national Hebrew Day.

In addition, the government is expected to establish a team for the maintenance of the language, a Hebrew conference, an annual prize for forerunners of the language, a national medal, and stamps heralding famous names in the Hebrew world.

Prime Minister Benjamin Netanyahu said during the cabinet meeting, “My father was born 100 years ago, and grew up in a home in which he learned the Hebrew of Ben-Yehuda and Haim Nahman Bialik. We owe Eliezer Ben-Yehuda for his contribution to the cornerstone of the revival of Israel in its own land.

“We gratefully accept the proposal made by Education Minister Gideon Sa’ar,” he said.

The Ministerial Committee for Symbols and Ceremonies determine that Ben Yehuda’s birthday will be named Hebrew Day.

The government is also expected to announce the holding of a conference led by Netanyahu and Culture and Sports Minister Limor Livnat, which will be devoted to a public debate on the current aspects of the language.