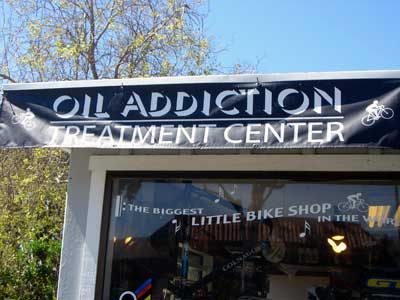 Quiz provided by Hemsol Solcellspaket
TEST YOUR KNOWLEDGE: TRUE or FALSE?
â€¢ Adding nuclear power plants, wind and solar power will make us oil independent.
â€¢ Burning coal is the #1 contributor to greenhouse gas emissions in the US.
â€¢ Drilling more will make us oil independent.
â€¢ Biofuels such as ethanol cause hunger in Africa.
â€¢ Our trade deficit with China overshadows the cost of oil imports.
â€¢ Foreclosure is the largest drain on the economy.

If you answered “yes” to any of these questions, than you need to learn the truth about oil.

Eyal Aronoff, an Israeli American, is the co-founder of Quest Software. In the last few years, Eyal has been a behind the scene operator in the effort to wean the world economy off its addiction to oil. Oil addiction is really, really, bad for all of us, and it empowers regimes that support Israel’s enemies while weakening America’s economy and its stature in the world. You can read more on SetAmericaFree.com

When we fill up our cars, most of us have a cognitive dissonance, ignoring the fact that petro-dollars are financing Radical Islam, anti-Zionism and anti-Americanism.

Eyal is one of the brightest people I have met. After sitting with Eyal, David Abitbol, and Josh Kaplan a few months back, we knew that his presentation needed to be in front of the Jewish world. We had a perfect venue to start with â€” in New Orleans at the Jewish Federations of North America’s Annual General Assembly. As Jewlicious had been asked to produce some programs, we realized right away that Eyal is Jewlicious, and his important message would make a great discussion amond Jewish leaders.

Eyal tells the story of how bad our addiction is with a dry wit, and methodical and original thinking. He explains that the world’s richest man, and Forbes #3 most powerful person, is the King of Saudi Arabia. Much of his wealth comes from the countries which are governed by the world’s #1 and #2 most powerful – the President of China and the USA â€” the largest consumers of oil in the world.

How much wealth is there in Saudi Arabia? Sauid oil reserves alone are estimated to be worth 22 trillion dollars. What can you buy for 22 trillion?
â€” Market cap of all us companies traded publicly is only 12 trillion
â€” Every home in USA and have 5 trillion left to spend
â€” JFNA is the second largest charity, raising 800 million a year. They used to raise a billion.
â€” 22 Trillion is enough to fund the JFNA budget for 27,000 years.

The value of the oil of all the Arab countries is approximately 60 trillion. For 60 trillion you could buy every public company in the world at current prices. Since they have so much money, we cannot outspend them. We cannot outspend them in the fight against terrorism, delegitimizing Israel, protecting democracy, or anything else. Our only hope to curb the power and influence of the oil wealthy regimes is to reduce and then curb the world’s dependence on OPEC oil.

Why not just run on leftover grease or ethanol? It turns out the the American car industry has helped craft laws and regulations that retain the status quo, favor cars that use gasoline to drive, and disallow many cars that are run on alt fuels such as ethanol and methanol exclusively.

At almost every turn of his presentation we discover that long held truths are really propaganda propped up by the Gas and Car companies. According to Aranoff, gasoline consumption is the single worst thing that we do to harm the economy and environment. Oil – not coal – is the largest producer of greenhouse gasses and urban pollution. If we are going to cut greenhouse gasses and pollution, should we not start with largest pollutant first?

His has a 10 point plan to take the US beyond oil within a decade. This transition away from oil will free $4 trillion dollar that our economy could use to rebuild growth and reduce the deficit while at the same time delivering a deadly knockout to the corrupt oil cartel and its para-militant cronies. Read below.