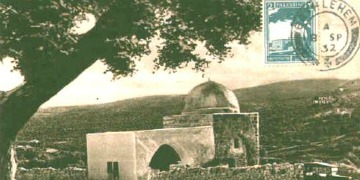 “And Rachel died, and was buried on the way to Ephrath, which is Bethlehem. And Jacob set a pillar upon her grave: that is the pillar of Rachel’s grave unto this day.” â€” Genesis 35:19-20

Alex Joffe’s important essay “Why Rachel’s Tomb Matters” published on JewishIdeasDaily.com places the UNESCO decision to discount the Jewish connection to Rachel’s Tomb in the context of a broader theological struggle.

Through the centuries, Jewish and Christian travelers and pilgrims often visited the site near Bethlehem and remarked on its pillar, made of eleven stones symbolizing the tribes of Israel, named after the sons of Jacob (excluding theÂ twelfth and youngest, Benjamin, the ordeal of whose birth occasioned his mother Rachel’s death).Â  Of course, we cannot know whether the site is “really” the burial place of Rachel, the “eternal mother,” but it was firmly engraved as such in Jewish and Christian consciousness….

It is true that Muslims are not alone in the impulse to deny Jews their past: consider the regularity with which Jewish cemeteries continue to be vandalized in Christian Europe. But Islam seems especially intent on erasing Jews from history on theological grounds. Flashpoints like Rachel’s tomb (or “Ezekeiel’s tomb” near the site of ancient Babylon) are especially vulnerable because they represent personages specifically claimed by Islam, but they are joined by houses of worship like the Great Synagogue in Oran, Algeria, seized and converted into a mosque in 1960, and communal buildings like the Haim Benchimol hospital in Tangiers, suddenly seized and torn down this year. Admittedly, there are showcase exceptions: the Maimonides synagogue in Cairo, the tiny Jewish communities in Morocco and Tunisia, preserved as if in amber for their considerable value as tourist destinations. But the vast number of sites that formed the living fabric of Jewish lifeâ€”the cemeteries, synagogues, and schools, not to mention homes and places of workâ€”are forever lost.