Now it’s time for some considered analysis of TribeFest – a 3 day young leadership event that took place this past Sunday-Tuesday in Las Vegas. Run by the Jewish Federations of North America, the event was meant to attract and energize both those involved in the organized Jewish community and those less or totally unaffiliated young Jews looking for a good time with fellow Jews and Jewesses. The plan was to put together an event that borrowed liberally from similar successful endeavors. For instance, at the main stage events, the atmosphere was reminiscent of a Birthright Israel Mega-Event. There weren’t so many flags but people were representing their cities with signs, banners, flags and t-shirts. I myself wore a Montreal Canadians baseball cap, representing the city I grew up in. 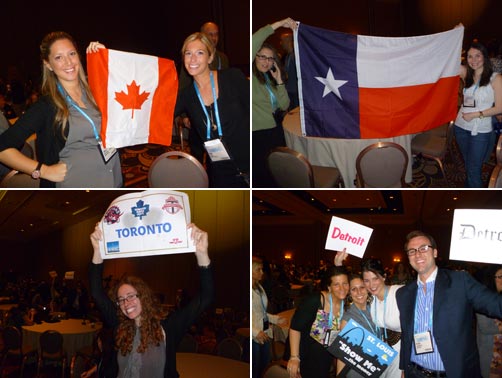 “Anyone here from… NEW YORK CITY? Wooooo!” Featured main stage speakers included former Blossom star and current cast member of the nerdlicious Big Bang Theory Mayim Bialik who discussed the role of Judaism in her life. Local pols included Las Vegas Mayor Oscar Goodman and the hilarious Congresswoman Shelley Berkley whose speech was a thinly veiled attempt to pimp out her Jewish, single grandson. Congressman Joe Heck pulled out his standard issue “We Love Israel” speech and delivered it as if he was at an AIPAC conference. It seemed a little out of place at the time, but I live in Israel so, you know, I kind of appreciated the sentiment. Of course we also sand the US, Israeli and Canadian (!!) national anthems. I was touched as I hadn’t sung “Oh Canada” in years!

Other main stage speaker highlights included our good friend and Jewlicious Fest alum, boxer Yuri Foreman, NFL team owners Mark Wilf (Minnesota Vikings) and Jonathan Kraft (New England Patriots), Security consultant and former Israeli commando Aaron Cohen (who thankfully didn’t recognize me despite the fact that I panned his book on Jewlicious) and Alina Geriovin Spaulding, director of communications for the American Hebrew Academy, who came to America from the Ukraine and gave an impassioned and touching speech where she stated “Everything I have and everything I have ever contributed to another human being is because of people like you standing up for me at a particular moment in time…”

Alina’s speech may have, more than anyone else’s, best encompassed what, at it’s very core, the Federation system is meant to be about. Once you got past all the glitz and artifice of Las Vegas, the Federation system is about raising money for charity, to help those less fortunate locally, nationally and in Israel. Young Jews congregated in Las Vegas to network, party, hook up etc. but they were also meant to be part of a process that builds our community and ensures its continuity and its continued vitality and viability.

Stay tuned for the next part of this write up: TribeFest: I’m a little bit Rock and Roll